Manchester United midfielder Ander Herrera, 28, is a target for AC Milan, who would be prepared to spend £32m to sign the Spaniard. (Tuttosport via Express)

Chelsea could turn for former Hull and Watford manager Marco Silva in a caretaker capacity if they part company with boss Antonio Conte before the season is over. (Times - subscription required)

Belgian 27-year-old forward Eden Hazard said "in football you never know" before stressing he was "happy" at Chelsea when asked about links to Real Madrid. (Marca)

Chelsea striker Alvaro Morata, 25, has not ruled out a move back to former club Real Madrid. When asked about a return to the Spanish club, he said he was "happy" with the Blues but "Madrid is always Madrid". (Mail)

Real Madrid believe it will be easier to sign Chelsea keeper Thibaut Courtois, 25, in the summer rather than his Manchester United counterpart David de Gea, 27. (Independent)

Arsenal and Chelsea both want to appoint ex-Barcelona boss Luis Enrique as their next manager. (Mundo Deportivo - in Spanish)

Arsenal striker Alexandre Lacazette, 26, could find his career at the club is over following the arrival of fellow forward Pierre-Emerick Aubameyang, 28, according to ex-Gunners midfielder Emmanuel Petit. (Sun) 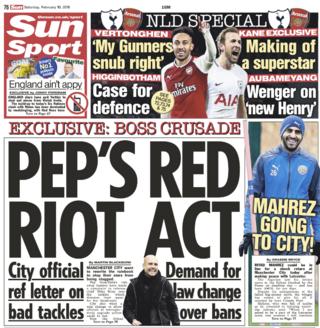 The Sun back page on Saturday

Everton forward Wayne Rooney says he would one day like to manage the Premier League club. (Telegraph)

Former England manager Roy Hodgson, who is now boss at Crystal Palace, has backed Wayne Rooney to do "a very good job" as a manager "because he is a top-class football guy". (Times - subscription required)

Crystal Palace boss Roy Hodgson says it is "too late" for Everton manager Sam Allardyce to apologise for mocking comments he made about his way of speaking. (Times - subscription required)

Swansea's owners say their record in the transfer market is "mixed" and that this summer's window was "poor". (Guardian)

Tottenham defender Jan Vertonghen, 30, rejected a move to Arsenal when he left Ajax in 2012 and the 30-year-old believes he made the right choice in joining Spurs instead. (Mirror)

The fact that the Premier League did not reveal the television rights bidding result on Friday suggests the process has gone into a second round of bidding. (Telegraph)

The Football League's highlights show will be moving from Channel Five to Quest from next season. (Mail)

Manchester United striker Marcus Rashford, 20 had assets worth more than £2m in April 2017 compared to a £100 a year earlier. (Sun)

Borussia Dortmund attacking midfielder Christian Pulisic, 19, has refused to rule out a potential move to Manchester United, the club he supported as a child. (Mail)

Leicester's 26-year-old Algeria winger Riyad Mahrez wants his club to guarantee he will be allowed to leave this summer before returning to training. (Times - subscription required)

Arsenal's French striker Alexandre Lacazette is under big pressure at the Emirates and could face a summer exit according to former Gunners player Emmanuel Petit. (Sun)

Mahrez's advisers claim the Foxes had already agreed to let him leave if a big club offered £50m but still rejected a Manchester City bid in January. (Mirror)

France and Monaco forward Thomas Lemar, 22, is not on Liverpool's list of targets for the summer transfer window. (Liverpool Echo)