England and Stoke goalkeeper Jack Butland, 24, is a £40m target for Liverpool and Arsenal. (Sun on Sunday)

Chelsea want manager Antonio Conte to leave the club in the summer by mutual consent, rather than have to sack him now. (Sunday Telegraph)

The Italian has urged Chelsea to stick with him and not react in "a stupid way". (Observer)

Everton are targeting Shakhtar Donetsk boss Paulo Fonseca to take over from current manager Sam Allardyce in the summer. (Mail on Sunday)

Are Spurs the Premier League's 'best of the rest'?

Phil McNulty's take on Pochettino's side...

Belgium midfielder Kevin de Bruyne, 26, who is under contract at Manchester City until 2023, will end his career playing in Major League Soccer, according to his agent. (Sun on Sunday)

Tottenham are confident Mauricio Pochettino will remain as their manager, despite interest in the Argentine from Real Madrid. (Sunday People)

Wigan defender Donervon Daniels, a 24-year-old centre-back from Montserrat, is being tracked by Cardiff, Sunderland and Norwich. (Sun on Sunday)

Chile forward Alexis Sanchez, 29, says Manchester United are the biggest club in England, and he has joined them in order to "win everything". (Sky Sports) 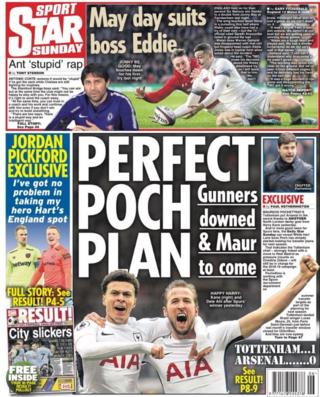 Germany boss Joachim Low has dismissed speculation he could take over at Bayern Munich next season after the World Cup. (Sky Sports Germany - in German)

Former England boss Steve McClaren is fronting a group of investors who are trying to buy a football club - with Leeds United one of his possibilities. (Sun on Sunday)

Newcastle manager Rafael Benitez is ready to quit at the end of the season, rather than go through another transfer window under owner Mike Ashley. (Mail on Sunday)

New West Ham signing Patrice Evra was one of the first players to console boss David Moyes after the Scot was sacked by Manchester United. (Sunday Mirror)