Tottenham defender Toby Alderweireld will not travel to Turin for their Champions League last-16 tie with Juventus, putting the 28-year-old Belgium player's future at the club in doubt. (Telegraph)

Spanish striker Fernando Llorente, 32, has cast doubt on his future at Spurs by admitting he misses Juventus. (Mirror)

Former Barcelona manager Luis Enrique wants to manage in the Premier League next season, with Arsenal and Chelsea possible destinations for the Spaniard. (Sun)

Chelsea manager Antonio Conte says he has spoken to Enrique as the pair "played against each other" and were opposing coaches. (Express)

Conte says he is a "bit of a disaster" in convincing Chelsea to buy players and "in this aspect I can improve a lot". (Guardian)

The Blues coachsays his players are not being adversely affected by the "rumours" surrounding his future. (Sky Sports)

And Conte has banned smiling during Chelsea's training sessions because "usually when you work you don't smile". (Sun)

West Brom boss Alan Pardew believes part of Chelsea's problems this season are down to the sale of striker Diego Costa, 29, to Atletico Madrid. (Star)

Sergio Aguero took home the match ball after Man City's 5-1 win over Leicester but how do his stats stack up?

The Premier League weekend in numbers

Leicester City winger Riyad Mahrez held clear-the-air talks with his team-mates after his 10-day absence, says defender Danny Simpson. The 26-year-old Algerian did not train and missed two matches after a potential transfer to Manchester City fell through. (Leicester Mercury)

Real Madrid defender Marcelo is convinced Paris St-Germain forward Neymar, 26, will join the club in the future - and thinks his fellow Brazilian will be a "great fit" at the La Liga club. (Marca)

But PSG defender Thiago Silva hopes Neymar will stay with the Ligue 1 club. (Canal+ via Goal) 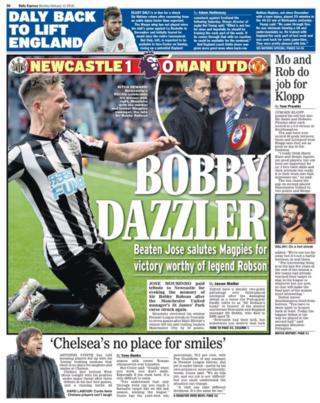 The Daily Express' back page

West Brom boss Alan Pardew will take his squad to Spain for a warm-weather training camp as they attempt to avoid relegation from the Premier League. (Telegraph)

Manchester City club captain Vincent Kompany will lift the trophy if his side win the Premier League this season, despite the Belgian playing a reduced role. (Manchester Evening News)

West Ham co-chairman David Sullivan has told fans to stick by the club after revealing he will be overhauling the way they scout, analyse and sign targets. (Evening Standard)

Newcastle manager Rafael Benitez tried to sign England keeper Joe Hart, who is on loan at West Ham from Manchester City, in January, but failed as Moyes believed the 30-year-old could still play a part for the club this season. (Mirror)

England and Stoke goalkeeper Jack Butland, 24, is a £40m target for Liverpool and Arsenal. (Sun on Sunday)

Chelsea want manager Antonio Conte to leave the club in the summer by mutual consent, rather than have to sack him now. (Sunday Telegraph)

The Italian has urged Chelsea to stick with him and not react in "a stupid way". (Observer)

Everton are targeting Shakhtar Donetsk boss Paulo Fonseca to take over from current manager Sam Allardyce in the summer. (Mail on Sunday)