Manchester United are monitoring Tottenham defender Toby Alderweireld's situation. The 28-year-old Belgian is out of contract in 18 months and he was not included in Spurs' squad to face Juventus in the Champions League. (Manchester Evening News)

England goalkeeper Jack Butland, 24, says he has not asked to leave Stoke after being linked with a move to either Liverpool or Arsenal. (ESPN)

However, Spain's prime minister, Mariano Rajoy, has said he "would not like" to see the Brazilian at Madrid. (AS)

Crystal Palace have flown in goalkeeper Diego Cavalieri, who is a free agent after cancelling his contract with Fluminese. The 35-year-old Brazilian worked with Eagles boss Roy Hodgson when he was at Liverpool. (Sun)

Ajax teenager Justin Kluivert says he would consider a move to the Premier League. The 18-year-old Dutch striker said Arsenal, Tottenham, Chelsea or Manchester United were clubs he could "see myself playing at in a few years". (Mirror)

Arsenal already have plans in place should manager Arsene Wenger leave in the summer. The club want to avoid the uncertainty over Wenger's position that affected them at the end of last season. (Mail)

Chelsea target Arturo Vidal says he is happy to remain at Bayern Munich. The 30-year-old Chilean midfielder's deal expires in 2019. (Sport - in German)

Manchester City will offer Brazilian goalkeeper Ederson, 24, a new deal seven months after he joined the Premier League side. (Sun)

Newcastle are keen to sign goalkeeper Martin Dubravka permanently. The 29-year-old Slovak joined the Magpies on loan from Sparta Prague in February until the end of the season. (Mirror)

Roma are aiming to put a 90m euro (£85m) release clause in goalkeeper Alisson's contract. The 25-year-old Brazilian has been linked with a move to Liverpool. (Calciomercato)

German Loris Karius is set to keep his place in goal for Liverpool in favour of Simon Mignolet when the Reds face Porto in the Champions League. (Times - subscription required)

West Brom manager Alan Pardew's methods are causing friction within the squad, but his position is safe despite the club chairman and chief executive being sacked on Tuesday. (Telegraph)

Championship side Bolton are interested in former West Brom striker Victor Anichebe. The 29-year-old Nigerian is out of contract after a stint in the Chinese Super League. (Birmingham Mail) 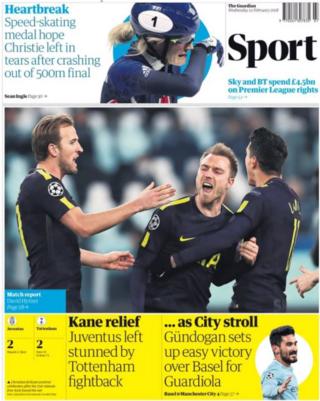 Real Madrid forward Gareth Bale's agent says the Wales international "loves" the club and "doesn't want to leave" amid claims Manchester United will try to sign the 28-year-old in the summer. (Tuttosport, via Manchester Evening News)

Tottenham striker Harry Kane, 24, is playing at the same level as Lionel Messi, Cristiano Ronaldo and Neymar, says Juventus defender Giorgio Chiellini, whose side face Spurs in the Champions League on Tuesday. (Sun)

Manchester United manager Jose Mourinho is planning to revamp his defence in the summer, with England centre-backs Chris Smalling, 28, and Phil Jones, 25, set to be sold. (Mirror)

Arsenal and Liverpool are interested in signing Schalke attacking midfielder Max Mayer, 22, in the summer. The Germany international, who is out of contract at the end of the season, is also wanted by Bayern Munich and AC Milan. (Star)

Reaction after Bayern win at Chelsea

Read more on Reaction after Bayern win at Chelsea