Real Madrid will make a move for Manchester United and France midfielder Paul Pogba this summer, but they will need to offer more than £120m for the 24-year-old, who was a world-record signing when he moved to Old Trafford. (Sun)

But Pogba is committed to working through any differences of opinion with United boss Jose Mourinho. (Telegraph)

Pogba's struggles at Manchester United are down to the arrival of Chile forward Alexis Sanchez, 29, at the club from Arsenal, according to the former Red Devils captain Paul Ince. (Mirror)

The wife and representative of Inter Milan captain Icardi, 24, is in talks to try to agree a deal with Manchester United, despite the striker being linked with a summer transfer to Real Madrid. (Corriere dello Sport via ESPN)

Liverpool are trying to get a deal agreed to sign Roma goalkeeper Alisson, 26, before the summer transfer window opens, but the Brazilian is valued at £62m and they face keen competition for him. (Sky Sports)

Alternatively, Liverpool could abandon their pursuit of Alisson and stick with German keeper Loris Karius, 24. (Telegraph)

England goalkeeper Joe Hart, 30, is ready to quit Manchester City and move abroad this summer after being dropped while on loan at West Ham this season. (Sun)

Malcom, the Brazil forward targeted by Arsenal and Tottenham, has confirmed he has an agreement with current club Bordeaux to leave in the summer. (UOL via Sky Sports)

The 20-year-old says he will choose which team to join when he leaves the French club. (UOL via Mail)

Former England captain John Terry wants to return to Chelsea in a coaching role as he plots a route to the top job at Stamford Bridge. The 37-year-old centre-back is out of contract at Aston Villa in July when his 12-month deal expires. (Mirror)

Tottenham may consider offers for Belgium international defender Toby Alderweireld, 28, this summer but are confident they will keep all the players they wish to retain. (London Evening Standard)

Spurs' latest contract talks with the defender ended in a stalemate. (ESPN)

Watford forward Richarlison, 20, has not ruled out a move to Chelsea in the summer. The Blues are considering a bid for the Brazil Under-20 international but could face competition from Arsenal and Tottenham. (London Evening Standard)

Real Madrid defender Sergio Ramos says Zinedine Zidane could still walk away from the Bernabeu at the end of the season, even if he wins a trophy. (Express)

Barcelona star Lionel Messi, 30, is set to be rested more frequently during the remainder of the season in an attempt to boost the Argentine's performance in critical games. (Marca)

Aston Villa have held positive talks with the new owners of Danish club Lyngby Boldklub about striking up a possible partnership. (Birmingham Mail)

Dutch legend Patrick Kluivert has advised his son Justin Kluivert, 18, who plays for Ajax, to turn down a move to the Premier League and consider playing in Spain. (Metro)

The wives of Argentina winger Angel di Maria, 30, and Brazil centre-back Thiago Silva, 33, have criticised Paris St-Germain manager Unai Emery after the pair were dropped for the 3-1 defeat by Real Madrid. (Marca) 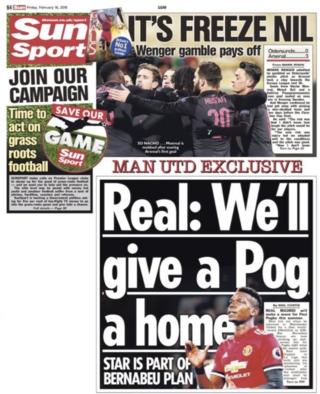 Tottenham are willing to offer manager Mauricio Pochettino a lucrative new contract. The Argentine signed a new five-year deal in 2016 worth £5.5m a year. (Telegraph)

Manchester United midfielder Marouane Fellaini has agreed a deal to join Besiktas at the end of the season. The Belgium international, 30, is out of contract at the end of the campaign and could leave on a free transfer. (Fotomac - in Turkish)