Arsenal are the latest club interested in RB Leipzig striker Timo Werner, 21. The Germany international - already a target for Chelsea, Liverpool and Manchester United - is valued at £50m and has rejected a new contract offer from the Bundesliga club. (Sun)

Arsenal manager Arsene Wenger has identified Lyon midfielder Nabil Fekir as his number one summer target. Wenger is willing to sanction a £45m bid for the 24-year-old Frenchman. (Mail)

West Brom manager Alan Pardew's position is under threat following four of the club's players apologised after a taxi was stolen from outside a fast-food restaurant in Barcelona on Thursday. (Sun)

Manchester City manager Pep Guardiola says the club did not do anything wrong in their failed attempt to try to sign Leicester City winger Riyad Mahrez. (Telegraph)

Manchester United and France midfielder Paul Pogba, 24, is not a target for Real Madrid. (Sky Sports)

Manchester United are interested in 26-year-old Nice and Ivory Coast midfielder Jean Michael Seri, who has a release clause of £33m. (Mail)

Chelsea striker Michy Batshuayi, who is on loan at Borussia Dortmund, says he "did not have a good time" while with the Blues but the 24-year-old feels "trusted by everyone" at the German outfit. (Sporza, via Mirror)

Spanish forward Sandro Ramirez, 22, who is on loan at Sevilla, has told Everton he does not want to return. (Mirror)

Barcelona captain Andres Iniesta, 33, could leave the club in the summer. The Spaniard has been being offered a £31m-a-season deal by Chinese Super League side Tianjin Quanjian. (Diario Sport - in Spanish)

Neymar's father has accused critics of his son's performance in Paris St-Germain's defeat by Real Madrid of being "vultures". (Express)

Arsenal are planning a first-ever sleeve sponsor from next year as they try to compete with the commercial strength of Manchester United. (Telegraph)

Former Arsenal defender Thomas Vermaelen, 32, says Barcelona's style of playing out from the back is more "advanced" than at his former clubs and "similar" to how Manchester City play under manager Pep Guardiola. (Guardian) 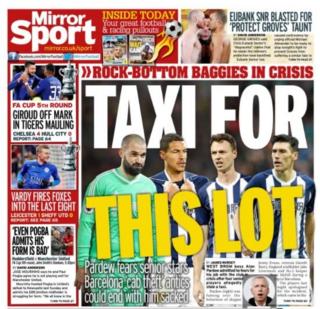 Real Madrid will make a move for Manchester United and France midfielder Paul Pogba this summer, but they will need to offer more than £120m for the 24-year-old, who was a world-record signing when he moved to Old Trafford. (Sun)

Liverpool are trying to get a deal agreed to sign Roma goalkeeper Alisson, 26, before the summer transfer window opens, but the Brazilian is valued at £62m and they face keen competition for him. (Sky Sports)

Malcom, the Brazil forward targeted by Arsenal and Tottenham, has confirmed he has an agreement with current club Bordeaux to leave in the summer. (UOL via Sky Sports)

Tottenham may consider offers for Belgium international defender Toby Alderweireld, 28, this summer but are confident they will keep all the players they wish to retain. (London Evening Standard)