Alan Pardew is fighting for his ­future at West Brom and a heavy defeat against Huddersfield on Saturday could end his reign at the Hawthorns after just 12 weeks. (Telegraph)

Real Madrid's Wales forward Gareth Bale, 28, knows the club will look to sell him in the summer, while the Spanish club will also try to offload France striker Karim Benzema, 30. (Mundo Deportivo via Sun)

Tottenham are looking to make a fresh move for Crystal Palace winger Wilfried Zaha, 25. Mauricio Pochettino's side failed with two bids for the Ivory Coast forward in the summer. (Mirror)

Paris St-Germain are not interested in signing Manchester United defender Marcos Rojo, 27, despite being linked with a £30m move for the Argentina centre-back. (ESPN)

Former England striker Ian Wright has assessed the relationship between Manchester United manager Jose Mourinho and midfielder Paul Pogba, 24, by saying "he is hearing they aren't as close as a few months ago, and that's something United can't afford". (Sun)

Real Madrid forward Marco Asensio, 22, says he has had offers from five clubs including Liverpool, Chelsea, Arsenal, Bayern Munich and Juventus, but club president Florentino Perez does not want to sell the Spain player. (Diario Gol - in Spanish)

Nabil Fekir's agent has refused to confirm if the 24-year-old France midfielder - a target for Arsenal - will be at Lyon next season. (Telefoot via Mirror)

Argentine striker Leonardo Ulloa, 31, says he wants to make his loan move from Leicester City to Brighton permanent at the end of the season. (Argus)

Lazio's Netherlands defender Stefan de Vrij, 26, looks likely to leave in June after his contract renewal was withdrawn, according to the Italian club's sporting director. (Mediaset Premium via Sky Sports)

Chelsea striker Olivier Giroud, 31, says "for a year and a half, it went from bad to worse" at former club Arsenal, which is why he had to leave in January. (Express)

Championship strugglers Sunderland have been put up for sale for £50m. The north-east side are in danger of suffering back-to-back relegations. (Mirror)

Kylian Mbappe will officially complete his £166m switch from Monaco after a contract clause was triggered that meant Paris St-Germain bought the 19-year-old France striker if they avoided relegation. (Mail)

Everton could be without on-loan Manchester City defender Eliaquim Mangala for the rest of the season after the France defender, 27, injured his knee in the win against Crystal Palace. (ESPN)

Barcelona manager Ernesto Valverde says the Spanish team wanted to avoid playing Chelsea in the last 16 of the Champions League, and also described the form of English teams in the competition as "incredible". (Guardian)

Barcelona keeper Marc-Andre ter Stegen was told at the age of 10 at Borussia Moenchengladbach that he could either go in goal or leave the club. (Telegraph)

West Ham manager David Moyes will attend the England rugby union side's training prior to their game against his native Scotland on Saturday. (Guardian)

Wales are set to receive £1m for taking part in the China Cup in March but only if Real Madrid forward Bale plays. (Mail) 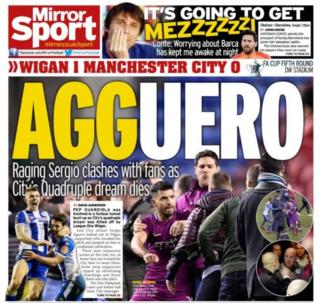 Chelsea's Belgium playmaker Eden Hazard, 27, says he is happy at Stamford Bridge but has not ruled out leaving the club in the future. (Telefoot - in French)

Former Chelsea manager Carlo Ancelotti is not interested in going back to Paris St-Germain because he wants a return to the Premier League. (Mirror)

Leicester have sent scouts to watch Benfica full-back Andre Almeida, 27, and winger Rafa Silva, 24. Both players were linked with the Foxes in January. (O Jogo via Leicester Mercury)