Belgium international Courtois has said his agent will listen to any offer from Real Madrid. (Mirror)

Paul Pogba's agent has offered the Manchester United midfielder to some of Europe's top clubs. The 24-year-old Frenchman was a substitute for United's Champions League draw with Sevilla on Wednesday. (Sports Illustrated)

England central defender Harry Maguire, 24, is ready to pledge his future to Leicester, despite being linked with Manchester City. (Sun)

West Bromwich Albion are closely monitoring the progress of Ostersund manager Graham Potter. The 42-year-old Englishman says he plans to manage in the Premier League in the future. (Mail)

What makes Mousa Dembele so special?

Ligue 1 side Nantes say they will not stand in manager Claudio Ranieri's way if he is approached about the vacant Italy job. (L'Equipe - in French)

Real Madrid striker Karim Benzema, 30, is wanted by four French clubs including Lyon and Paris St-Germain - and the France international would not be averse to a move. (AS)

Barcelona are working on a deal to sign 21-year-old Brazilian midfielder Arthur Melo from Gremio for about 30m euros (£26.4m). (Mundo Deportivo - in Spanish)

Tottenham defender Davinson Sanchez, 21, says he is not interested in a move to Real Madrid this summer. The Colombian joined Spurs from Ajax in August. (Mirror)

Manchester United are keen on Dinamo Zagreb's 19-year-old Croatian midfielder Nikola Moro, who has been described as the 'new Luka Modric'. (Talksport) 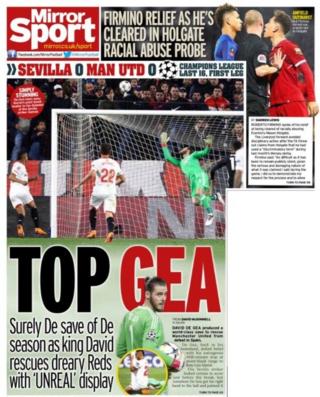 Chelsea boss Antonio Conte says "in my line of work you always have your bags packed" - but again insisted he wants to stay at Stamford Bridge. (Express)

Chelsea defender Gary Cahill is in danger of losing out on a place in England's World Cup squad. (Times - subscription required)

Racing Club defender Leonardo Sigali has only played 270 minutes for his new side since signing from Dinamo Zagreb in January - but he has already got a new haircut sporting the club's crest. (Four Four Two)

West Ham are ready to offer boss David Moyes a two-year deal in the summer if he keeps the Hammers in the Premier League - and the Scot is already looking at player recruitment for next season. (Express)

Former Liverpool playmaker Philippe Coutinho had 24 hours to forget in Barcelona as his car was towed away for being parked illegally and then his new home was burgled. (Daily Mail)