The Arsenal board have turned against manager Arsene Wenger and are drawing up a list of replacements for the 68-year-old. (Mirror)

Wenger claims he "turned the whole world down" to remain as Arsenal manager. (Telegraph)

The Frenchman's future was cast into doubt after he refused to confirm whether he will see out his contract that ends in 2019. (Mirror)

Former Barcelona president Joan Laporta, who says he gambled in appointing Pep Guardiola as the club's manager in 2008, is urging Arsenal to consider Thierry Henry as a replacement for Wenger. (Telegraph)

West Ham are ready to sign Northern Ireland defender Jonny Evans, 30, for £3m from West Brom at the end of the season. (Birmingham Mail)

Arsenal and England midfielder Jack Wilshere, 26, says he will quit the club in the summer, unless they offer him a significantly improved contract. (Sun)

Manchester United will ditch plans to expand Old Trafford this summer to concentrate on backing manager Jose Mourinho in the transfer market. (Mail)

Alan Pardew will be sacked if West Brom lose at Watford on Saturday. (Mirror)

Juventus are keen to conclude the signing of Liverpool midfielder Emre Can, 24, to avoid entering an auction for the Germany international in the summer. (La Gazzetta dello Sport)

Liverpool and Barcelona are interested in 19-year-old Lyon midfielder Houssem Aouar. The French teenager has played 17 times in Ligue 1 this season. (Goal)

Manchester City have told their England winger Raheem Sterling, 23, that he must wait until the end of the season before talks over a new contract can begin. (Sun)

Everton owner Farhad Moshiri is drawing up a shortlist of potential replacements to take over from Sam Allardyce, the former England manager, in the summer. (Star)

Bayern Munich are yet to decide on whether to sign Real Madrid playmaker James Rodriguez on a permanent deal, with the 26-year-old Colombian currently on loan at the Bundesliga club. (Bayern TV, via Goal)

Sport deals with 'Beast from the East'

'So cold it hurts': Football matches hit by snow

Roma's Belgian midfielder Radja Nainggolan, 29, says he turned down Chelsea and several other clubs in favour of staying in the Italian capital. (Sport Voetbal, via ESPN)

Atletico Madrid coach Diego Simeone wants the transfer deadline to be the same across the world, after seeing his squad reduced to 19 players before the close of the Chinese window. (Mail)

Slovenian goalkeeper Jan Oblak, 25, is yet to renew his contract with Atletico Madrid, with Liverpool, Paris St-Germain and Arsenal all interested in the player. (AS)

Rio Ferdinand has recalled the moment he realised Roy Keane was "crazy" in his first Manchester United training session. (Mirror) 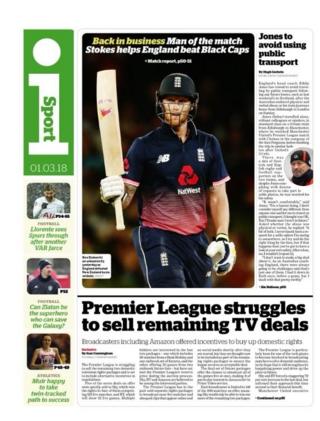 Back page of Thursday's ipaper

Real Madrid are considering a move for Bayern Munich's Poland striker Robert Lewandowski, 29, in the summer, such is the difficulty involved in signing top striker target England's Harry Kane, 24, from Tottenham. (Independent)

Everton are planning to sack manager Sam Allardyce in the summer and Shakhtar Donetsk boss Paulo Fonseca is leading the list of candidates to replace him. (Star)

Chelsea are expected to reschedule contract talks with Belgium goalkeeper Thibaut Courtois, 25, a target for Real Madrid, until after their key games against Barcelona and Leicester in March. (London Evening Standard)

Manager Jose Mourinho is unhappy at how long Manchester United are taking to offer new contracts to his players. (Mail)

Luis Enrique's hopes of succeeding Antonio Conte as Chelsea manager could rest on whether or not he is prepared to accept a significantly lower wage than he was paid by Barcelona. (Telegraph)