Liverpool have drawn up a three-year deal for Manchester United and Belgium midfielder Marouane Fellaini, with Paris St-Germain and Monaco also interested in the 30-year-old, who is out of contract in the summer. (L'Equipe - in French)

Manchester United are hoping to beat Manchester City to the signing of Shakhtar Donetsk and Brazil midfielder Fred, 25, this summer. (Mirror)

Who is the jewel in his side's crown?

Find out in Garth's team of the week - and pick your own...

Liverpool's 24-year-old German midfielder Emre Can, who is out of contract at the end of the season, could make a decision about his future in the next two weeks, according to Juventus chief Beppe Marotta. (Mediaset Premium, via Express)

Bayern Munich will offer new contracts to French winger Franck Ribery, 35, and Dutch wideman Arjen Robben, 34. Both players are due to be out of contract in the summer. (Bild - in German)

West Brom goalkeeper Ben Foster, 35, wants to stay if the Baggies are relegated from the Premier League. (Mail)

Sheffield Wednesday's 19-year-old forward George Hirst - son of ex-Owls striker David - is set to join Manchester United, with the Championship side due compensation for the move. (Mirror)

Manchester City boss Pep Guardiola says he could be to blame for his side's defeats against Liverpool and Manchester United, but added his team's lack of ruthlessness in front of goal means they are not ready to compete with Europe's elite. (Times - subscription required)

Manchester United manager Jose Mourinho was struck by a pound coin thrown from the crowd during their derby victory over Manchester City on Saturday, but the Portuguese did not report the incident. (Star)

Liverpool boss Jurgen Klopp says Manchester City's offer to use a training base in Manchester to prepare for the second leg of their Champions League quarter-final on Tuesday was made too late. Manchester United also rejected an approach from the Reds to use their junior facilities. (Telegraph)

Chelsea manager Antonio Conte says his team do not deserve to qualify for the Champions League if they cannot beat teams like West Ham, after a 1-1 draw with the Hammers. (Times - subscription required)

Tottenham midfielder Christian Eriksen says there have been arguments in the dressing room over whether he or Harry Kane got the final touch on Spurs' second goal against Stoke on Saturday. (Independent)

Former referees' chief Keith Hackett does not "understand" why Martin Atkinson did not send off Manchester United defender Ashley Young against Manchester City, and says Atkinson's performance is "proof of why no English referee will be represented at this summer's World Cup finals". (Telegraph)

Dutch league leaders PSV Eindhoven say Everton have made an approach for their director of football Marcel Brands. (Sky Sports) 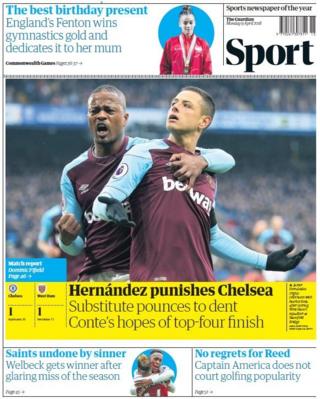