Chelsea manager Antonio Conte is set to leave the club in the next 48 hours - with former Barcelona coach Luis Enrique being lined up to replace him. (Express)

Conte says the Blues' squad needs an overhaul whether he stays at Stamford Bridge or not. (Telegraph)

Napoli claim talks with their manager Maurizio Sarri have broken down amid interest from Chelsea. (Mirror)

Former Paris St-Germain coach Unai Emery has emerged as a shock last-minute candidate to take over as the new Arsenal manager. (Mail)

Can you name every club to win multiple FA Cups?

Manchester United's France midfielder Paul Pogba said "you're never sure of anything" as the 25-year-old offered no assurances he will be at the club next season. (Mail)

Atletico Madrid and France forward Antoine Griezmann, who has been heavily linked with a switch to Barcelona this summer, was greeted with some whistles from fans when he came on against Eibar, but manager Diego Simeone says the 27-year-old has the club's "unconditional support". (Express)

West Ham are confident of appointing Manuel Pellegrini as their new manager this week - which would bolster their chances of signing 35-year-old Ivory Coast midfielder Yaya Toure, who has left Manchester City. (Telegraph)

Huddersfield Town manager David Wagner, who has been linked with Borussia Dortmund,Leicester City and Southampton, has agreed a deal to stay with the Terriers. (Times - subscription required)

England midfielder Jack Wilshere, 26, is ready to sign the three-year contract he has been offered to stay with Arsenal, despite big offers from Everton and Wolves.(Mirror)

Manchester United have secured a preliminary agreement with 24-year-old Brazilian midfielder Talisca, who has been on loan at Besiktas from Benfica. (Star)

Liverpool target Piotr Zielinski, 24, is set to agree a new deal with Napoli which will keep the Poland international at the Italian club until 2023. (Sun)

Schalke midfielder Max Meyer has been linked with Arsenal and Liverpool but the 22-year-old Germany international has agreed a move to join Hoffenheim. (Leipziger Volkszeitung via Star)

Spanish midfielder Santi Cazorla has been offered the chance to spend pre-season at his former club Villarreal with the 33-year-old's Arsenal contract due to expire. (Evening Standard)

AC Milan's Spanish midfielder Suso, 24, would welcome a return to Liverpool - but not in the immediate future. (Liverpool Echo) 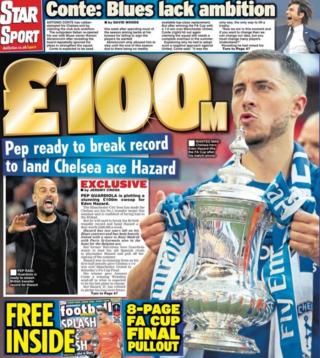