Paris St-Germain forward Neymar, 26, has made it clear he wants to leave for Real Madrid this summer, a year after the Brazilian joined the French champions. (Goal)

But United are ready to pull out of a £53m move for Shakhtar Donetsk and Brazil midfielder Fred, 25. (Metro)

United midfielder Marouane Fellaini is wanted by Italian giants AC Milan. The Belgian international, 30, is available on a free transfer after refusing a new deal at Old Trafford. (Sun)

Manchester City are poised to sign Leicester winger Riyad Mahrez, 27, after missing out on the Algeria international in the January transfer window. (Manchester Evening News)

The best, worst and weirdest moments of this season's Champions League

A look back at this season's competition

However, Mahrez's move to the north-west will not be completed quickly because it has hit a snag over agents' fees. (Leicester Mercury)

Tottenham are one step closer to signing Ajax centre-back Matthijs De Ligt. The Eredivisie runners-up are on the brink of bringing in a replacement for the 18-year-old Dutch international, allowing De Ligt to move to London. (Football.London)

Napoli boss Maurizio Sarri looks increasingly likely to leave for Chelsea after the Italian club's president Aurelio de Laurentiis met Carlo Ancelotti for talks with a view to him taking over from Sarri. (Evening Standard)

Fulham manager Slavisa Jokanovic has emerged as a surprise candidate for the Chelsea manager's job. (Express)

But Lascelles says he has no intention of leaving Newcastle, saying it is the "happiest" he's been. (Northern Echo)

Jose Mourinho has chosen to promote Kieran McKenna from Manchester United's academy staff as the third of a trio of replacements for outgoing assistant manager Rui Faria. (Daily Record)

Goalkeeper and Juventus and Italy legend Gianluigi Buffon, 40, is close to agreeing a deal with French champions Paris St-Germain. (Mail)

Aston Villa defender John Terry will keep the club waiting on his future this summer with offers from Major League Soccer and the Chinese Super League on the table. (Mirror) 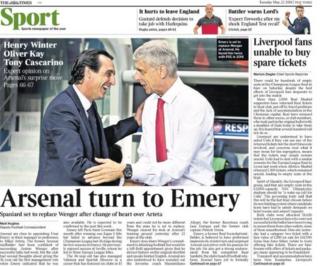