Manchester United are close to signing Shakhtar Donetsk midfielder Fred, 25, and hope to complete a deal for the Brazil international next week. (Manchester Evening News)

United have opened talks with Tottenham for the signing of defender Toby Alderweireld, 29, but Spurs want £75m for Belgium international. (Mirror)

Manchester City target Jorginho, 26, will hold talks with Napoli next week with the £52m-rated Brazilian setting his sights on a move to the Premier League. (Sun)

City will have to pay £60m to sign Leicester winger Riyad Mahrez, 27, who they tried to sign in the January transfer window. (Guardian)

Former Napoli boss Maurizio Sarri, who was replaced by Carlo Ancelotti, has not agreed terms with Zenit St Petersburg as he wants to join Chelsea. (Mail)

A demanding father, a radical coach and a boatload of belief - the making of Klopp

Key to Chelsea appointing Sarri would be the transfer of 31-year-old defender David Luiz to the Italian club. (Express)

Atletico Madrid and Inter Milan are both interested in signing West Brom striker Salomon Rondon, 28, and the Venezuelan is available for £16m after the club's relegation from the Premier League. (Sky Sports)

Atletico have offered 27-year-old forward Antoine Griezmann £8.75m more in wages than Barcelona to keep the France international at the club. (Mail)

Leicester striker Jamie Vardy, 31, says his potential transfer to Arsenal was on his mind at Euro 2016. (Evening Standard)

Martin Skrtel's agent says the the 33-year-old defender's move to Rangers from Fenerbahce is dead in the water becausethe Scottish club are finding it "impossible" to finance. (Daily Record)

Everton left-back Leighton Baines, 33, has no intention of leaving the club despite being linked with a move to Major League Soccer in the United States. (Liverpool Echo)

Real Betis have joined fellow La Liga side Athletic Bilbao in the chase to sign Newcastle midfielder Mikel Merino, 21. (AS - in Spanish)

The 52-year-old riddle of who stole the Jules Rimet World Cup trophy in 1966 - before it was found again by a dog named Pickles - has been solved. It was taken by a pair of gangland brothers who "nicked it for the thrill". (Mirror) 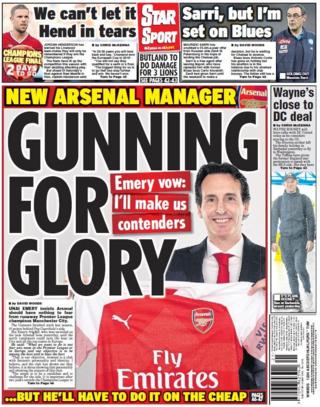