Former Arsenal boss Arsene Wenger, 68, is considering a return to Japan to resume his managerial career. (Mail on Sunday)

However, Paris St-Germain are in competition with Manchester United for the signing of Sandro, although United have reportedly opened talks with the Brazil defender's agent. (Manchester Evening News)

Ostersunds chairman Daniel Kindberg and manager Graham Potter have admitted they have received an approach from managerless SwanseaCity, although no deal for Potter has been agreed yet. (Wales Online)

How did you rate the players in the Champions League final?

Meanwhile, Swansea striker Jordan Ayew, 28, is attracting interest from Celtic, according to a close friend of the forward. (Daily Record)

Manchester City are closing in on the £75m transfer of winger Riyad Mahrez, 27, from Leicester City. (Mail on Sunday)

West Ham are reportedly leading the race to sign Barcelona defender Marlon Santos, 22, who is currently on loan with French club Nice. (Mundo Deportivo, in Spanish)

Aleksandar Mitrovic's future will be decided after the World Cup, with Newcastle keen to offload the 23-year-old striker to fund their summer spending and Fulham wanting to make his loan move permanent after helping them win promotion to the Premier League. (Newcastle Chronicle)

Manchester City and England defender Kyle Walker, 27, believes the international team has moved on from the disappointment of Euro 2016. (Guardian)

Borussia Dortmund have held further discussions with Chelsea over the proposed permanent signing of Michy Batshuayi. The 24-year-old striker spent the second half of the season on loan at the German club. (Mail on Sunday) 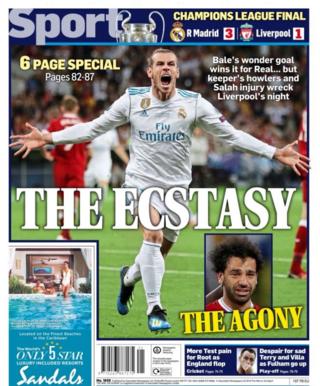 Read more on Chelsea in talks to sign striker Werner

'Chelsea was my paradise - but one thing spoiled it'