Sarri has made Napoli and Belgium forward Dries Mertens, 31, his top target when he takes over at Stamford Bridge. (Telegraph)

Former Chelsea legend Gianfranco Zola says he is in talks to return to his former club as a member of the coaching staff. The Italian, 51, played for the Blues between 1996 and 2003. (Sun)

Liverpool midfielder Emre Can will have a medical at Juventus this week. The Reds have confirmed the German international, 24, will leave Anfield this summer. (Mail)

Your best & worst players so far

How did you rate the players during the first round of World Cup group games?

Crystal Palace will offer Wilfried Zaha £120,000 a week to hold on to the 25-year-old Ivory Coast winger, who has attracted interest from Tottenham. (Mirror)

Huddersfield are set to beat Southampton and Lyon to the £11m signing of Belgium midfielder Anthony Limbombe, 23, from Club Brugge. (Sun)

Arsenal will hold talks with the agent of Sevilla's Argentine midfielder Ever Banega, 29, this week. (Mirror)

Tottenham and Arsenal have entered the race to sign Liverpool striker Rhian Brewster. The 18-year-old Englishman is yet to sign his first professional contract. (Sun)

West Brom have rejected Burnley's initial bid for Jay Rodriguez, with the 28-year-old English striker open to returning to his former club. (Mail)

Tottenham are keeping a close eye on Lyon's 21-year-old French midfielder Tanguy Ndombele, but have not made contact with the Ligue 1 club. (Sky Sports)

Marseille are contenders to sign 28-year-old Everton and France midfielder Morgan Schneiderlin, who has been told he can leave Goodison Park. (France Football, via Tribal Football)

Wolves and Portugal winger Ivan Cavaleiro, 24, has no intention of leaving Molineux despite being linked with a move to Huddersfield. (Birmingham Mail)

The agent of Leicester City's Nigeria forward Ahmed Musa, 25, has confirmed they are in talks over a move with Galatasaray. (Leicester Mercury)

Former England manager Sven Goran Eriksson says he was approached twice by Chelsea to become their manager during the early years of Roman Abramovich's ownership. (Star) 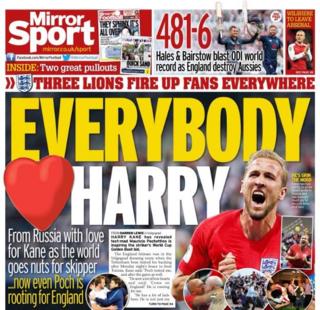 After his two goals against Tunisia, the Daily Mirror reports that Harry Kane's club manager Mauricio Pochettino was quickly on the phone to congratulate the striker