West Ham forward Manuel Lanzini, 25, is set to miss the whole of next season because of the knee injury he sustained in training with Argentina just before the World Cup. (Mirror)

Atletico Madrid and Uruguay centre-back Diego Godin could be on his way to Manchester United this summer. The 32-year-old may be available for £18m, with only one year remaining on his contract. (AS, via Manchester Evening News)

How England rely on set-pieces

And Alan Shearer says it's something to be proud of...

Sevilla insist midfielder Ever Banega, 29, is not for sale this summer amid interest from Arsenal in the Argentina international. (Independent)

Arsenal have cooled their interest in Brighton defender Lewis Dunk. The Gunners were considering a bid for the 26-year-old Englishman but new boss Unai Emery has other plans. (Mirror)

Arsenal are considering a bid for Juventus and Morocco centre-back Mehdi Benatia. The 31-year-old is also a target for Borussia Dortmund and Marseille. (Gazzetta dello Sport, via Express)

Liverpool could miss out on Gremio and Brazil forward Luan. Lazio have made an early move for the 25-year-old. (Mirror)

Lyon are prepared to offer Nabil Fekir, 24, a new deal to prevent Liverpool resurrecting a move for the France forward. (Mirror)

And Lyon president Jean-Michel Aulas said he has spoken to Manchester United boss Jose Mourinho, who could be set to bid for Fekir. (Bein Sports, via Manchester Evening News)

Chelsea are not prepared to sell England midfielder Ruben Loftus-Cheek this summer but could allow another season-long loan for the 22-year-old, who spent last year at Crystal Palace. (Mail)

Leicester City have made a £12m bid for 29-year-old Besiktas defender Domagoj Vida, who is playing for Croatia at the World Cup. (Sabah, via Leicester Mercury)

Newly promoted Fulham want to bring in Bosnia Under-21 midfielder Edis Smajic, 18, as they prepare for their return to the Premier League. Smajic plays for Sloboda Tuzla in his homeland. (Sun)

Wolves are interested in signing Lazio's 23-year-old Brazilian centre-back Wallace, who is a client of agent Jorge Mendes. (Birmingham Mail)

Italian champions Juventus are looking to finalise a deal for CSKA Moscow and Russia midfielder Aleksandr Golovin, 22, but are not interested in departing Arsenal and England midfielder Jack Wilshere, 26. (Goal)

Juventus have told Leicester they must pay £17.5m if they want Italian midfielder Stefano Sturaro, 25. (Il Messaggero, via Leicester Mercury)

Borussia Dortmund's 26-year-old German left-back Erik Durm will have a medical with Huddersfield this week. (Kicker - in German)

Southampton are willing to pay 20 million euros (£17.6m) for Barcelona striker Paco Alcacer, 24, but face competition for the Spaniard from Turkish side Fenerbahce. (Mundo Deportivo - in Spanish)

And Alcacer is also resistant to leaving Barcelona despite the club looking to sell him, delaying any potential move. (Sport) 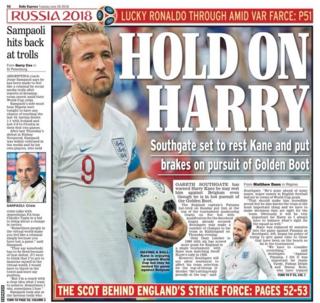