Belgium manager Roberto Martinez has told Chelsea forward Eden Hazard, 27, he must consider a move away from Stamford Bridge, amid interest from Real Madrid. (Mirror)

Manchester United are set to miss out on Gareth Bale, with the 29-year-old Wales forward expected to be told he is key to new Real Madrid manager Julen Lopetegui's plans. (Metro)

How Juventus unveiled Cristiano Ronaldo to the world

Newcastle and Celtic are interested in Uruguay midfielder Giorgian de Arrascaeta, 24, who is valued at £18m by Cruzeiro. (Sun)

Tottenham forward Son Heung-min is set to miss the first four games of the Premier League season after being called up to the South Korea squad for the Asian Games. (Mirror)

Manchester City's England defender John Stones will dismiss worries about World Cup fatigue and be ready for his club's meeting with Chelsea in the Community Shield. (Manchester Evening News)

Monaco have made an offer to CSKA Moscow for 22-year-old Russia midfielder Aleksandr Golovin, who has also been linked with a £22m move to Chelsea. (Sport Express - in Russian)

New Arsenal manager Unai Emery is preparing to trim his squad - and the futures of England striker Danny Welbeck, 27, and Colombian goalkeeper David Ospina, 29, are in doubt. (Telegraph)

Fenerbahce have made Tottenham and Belgium midfielder Mousa Dembele, 31, a target as they look to further strengthen their squad. (Fanatik, via 90min)

Newcastle's English defender Jamaal Lascelles, 24, has no intention of leaving amid interest from other Premier League clubs. (Times - subscription required)

Lyon and France midfielder Nabil Fekir, 24, has dropped a hint a move to Liverpool is still possible. (Metro)

Fulham have made a £1.3m bid for Espanyol's Spanish goalkeeper Roberto Jimenez, 32. (Lacontra Deportivo - in Spanish) 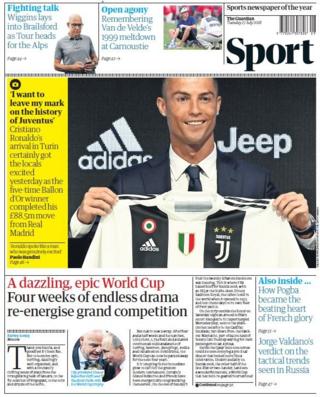