Liverpool have agreed a two-year deal with Croatia defender Domagoj Vida, 29, but must meet Besiktas' £22m asking price. (A Spor - in Turkish)

No manager, no players, no game

How do you build a team from scratch?

Chelsea are monitoring Lazio and Serbia midfielder Sergej Milinkovic-Savic, with a view to making a move for the 23-year-old. (Independent)

Daniele Rugani's agent says the Blues are interested in the 23-year-old Juventus and Italy centre-back. (Radio Sportiva, via Goal)

Premier League newcomers Wolves have also made an enquiry to sign Mina from Barcelona. (Sky Sports)

Wolves have made an £18m bid to sign Spanish winger Adama Traore, 22, from Championship side Middlesbrough. (Sun)

Real Madrid may make an £89m move for Paris St-Germain and Uruguay striker Edinson Cavani, 31, to replace Portugal forward Cristiano Ronaldo, who has joined Juventus. (AS - in Spanish)

Meanwhile, 23-year-old English midfielder Isaac Hayden reiterates his intention to leave the Magpies - despite turning out for the club in Tuesday's friendly against Hull City. (Newcastle Chronicle)

Ipswich Town manager Paul Hurst says now is not the time for him to be talking to 25-year-old Denmark defender Jonas Knudsen about the player's long-term future. (East Anglian Daily Times) 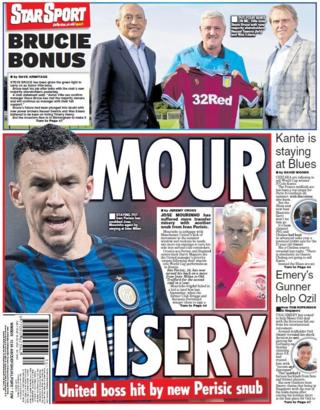