West Ham manager Manuel Pellegrini is not in imminent danger of being sacked despite four straight Premier League defeats. (Mirror)

Spain goalkeeper David de Gea, 27, is expecting to sign a new contract at Manchester United worth £350,000 a week. (Sun)

Paris St-Germain's Brazil forward Neymar, 26, would rather move to Chelsea or Arsenal than one of the Manchester clubs. (Express)

Tottenham and Belgium midfielder Mousa Dembele, 31, is set to move to China in January. (Sun)

Leicester City are keeping an eye on Chelsea midfielder Danny Drinkwater amid interest in bringing him back to the King Power Stadium on loan in January. The 28-year-old Englishman helped the Foxes win the Premier League title in 2016. (Express)

Manchester United manager Jose Mourinho says a return to Old Trafford for Cristiano Ronaldo was "never on the table" in the summer. The 33-year-old Portugal forward joined Juventus from Real Madrid. (Sky Sports)

Ronaldo is yet to score for Juventus - but his eight-year-old son netted four times for one of their junior sides at the weekend. (Marca)

Lazio's 23-year-old Serbia midfielder Sergej Milinkovic-Savic, who was a target for Manchester United and Chelsea, agreed a deal to sign for Juventus this summer but the move fell through. (Calciomercato)

Manchester United chartered a private jet to bring Atletico Madrid and Uruguay defender Diego Godin, 32, to Old Trafford on transfer deadline day but had to cancel it when the deal broke down. (Mirror)

Manchester City manager Pep Guardiola's treatment of Germany winger Leroy Sane, 22, has got the rest of his players fearing for their places. (London Evening Standard)

Arsenal's Germany defender Shkodran Mustafi could be fined by the Football Association for his goal celebration after he opened the scoring against Cardiff on Sunday. (Mirror)

Liverpool and England defender Joe Gomez has backed Brazil goalkeeper Alisson to continue playing out from the back despite his error against Leicester. (Goal)

Former England manager Sam Allardyce says he was in "turmoil" after losing the national job. (Talksport) 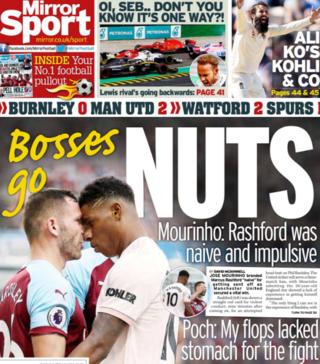