Manchester United manager Jose Mourinho joked he has no fears over losing his job because it would cost the club "a fortune" to sack him. (La Repubblica - via Telegraph)

Watford are set to reward manager Javi Gracia with a new contract after the Hornets' strong start to the season. (Mail)

Manchester City are ready to wait until the end of the season before offering 32-year-old Belgium defender Vincent Kompany a new contract. (Sun)

Manchester United's 25-year-old France midfielder Paul Pogba has told the club he wants to return to Juventus in January. (Express)

Milner the machine and are Palace a one-man team?

Sporting Lisbon will offer a new contract to their 20-year-old Cape Verde forward Jovane Cabral and raise his release clause to 45m euros (£40.5m) amid interest from Barcelona. (Ojogo - in Portuguese)

Fifa has written to Inter Milan and Real Madrid to say they will not be acting on the Spanish club's complaint over an alleged illegal approach for their 32-year-old Croatia midfielder Luka Modric. (Gazzetta dello Sport)

Spain midfielder Ander Herrera, 29, is willing to hear offers for a January move away from Manchester United after his contract talks stall. (Metro)

Liverpool boss Jurgen Klopp says he has no plans to rotate his goalkeepers for the Champions League, with 25-year-old Brazil international Alisson set to play. (Guardian)

Leicester's Croatian central defender Filip Benkovic, 21, has said he wants a loan move away from the Foxes, with Celtic his preferred destination. (Leicester Mercury)

Messi says Real Madrid have been left weakened by Ronaldo's departure and this season "it is time" Barca won the Champions League again. (El Pais - in Spanish)

Sunderland are still trying to sell Senegal defender Papy Djilobodji, 29, and 24-year-old Gabon midfielder Ibrahim Ndong, but the club have been refusing to pay them since they did not return for pre-season. (Sunderland Echo)

The Black Cats are considering taking legal action against Djilobodji over his failure to return. (Mirror)

Gambling sponsors will be banned at Wembley if the venue is sold to a new owner under conditions laid down by the government. (Times - subscription required)

Two banned Southend players are set to miss the club's EFL Trophy fixture on Tuesday, but the match will not count towards their three-match suspensions. (Southend Echo) 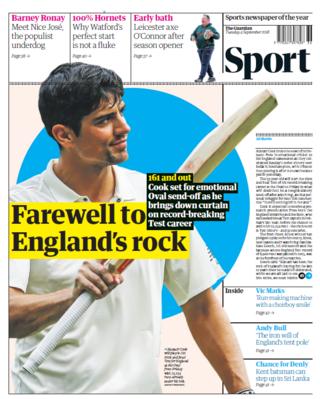