Barcelona's Uruguay forward Luis Suarez says Manchester United midfielder Paul Pogba would be welcome at the Nou Camp, as the 25-year-old France international continues to be linked with a move away from Old Trafford. (ESPN)

Alternatively, Pogba is desperate to play under his idol Zinedine Zidane in the future, amid reports United will turn to the ex-Real Madrid boss to replace manager Jose Mourinho. (Metro)

Is this the weirdest job in football?

France World Cup-winning defender Benjamin Pavard, 22, has denied he has reached any sort of agreement to join Bayern Munich from Stuttgart. (Sky Sports)

Leicester and England defender Harry Maguire, 25, says Manchester United did make a summer move for him - but he still owes the Foxes. (Mirror)

West Ham would have to pay £15m in compensation to Manuel Pellegrini if they were to sack their Chilean manager. (Times - subscription required)

Arsenal are being linked with a surprise move for 33-year-old Brazilian Filipe Luis, the Atletico Madrid and former Chelsea defender, in January. (Mirror)

Laurent Koscielny's agent says the 32-year-old France defender was considering leaving the Gunners before injuring his Achilles in May. (ESPN)

Everton hope James McCarthy will return to training before the end of September as the 27-year-old Republic of Ireland midfielder continues his comeback from a broken leg. (Liverpool Echo)

Crystal Palace Ladies' reserve players have been told they must each raise £250 in sponsorship if they want to keep playing for the club. (Guardian)

Tottenham and England midfielder Dele Alli, 22, has revealed how a bracelet given to him by a Russian taxi driver during the World Cup joined his lengthy list of lucky charms. (Standard) 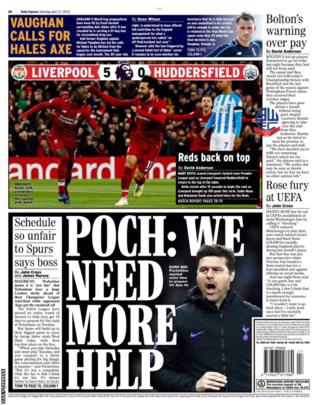