Manchester United's 25-year-old France midfielder Paul Pogba will not push for a move in January. (Mirror)

Liverpool have made contact with the mother and agent of Paris St-Germain's 23-year-old French midfielder Adrien Rabiot. (ESPN)

Manchester City's Spanish manager Pep Guardiola has banned the use of mobile phones from the 'working spaces' of the club's training ground. (Mail)

Tottenham face spending the entire Premier League season at Wembley as the club take up an option with the FA to extend their national stadium stay until December. (Mail)

A salesman, a student and an internet star

Manchester City are lining up a move for £54m-rated Real Betis's Spain U21 left-back Junior Firpo. The Dominican Republic-born 22-year-old is of interest as he can also fill a central defensive role. (Eldesmarque - via Sun)

Wolves boss Nuno Santo has been added to a list of potential successors to Jose Mourinho as Manchester United manager. (Bild - via Express)

England and Leicester defender Harry Maguire, 25, says he does not understand how the Uefa Nations League works. (Telegraph)

Former Norwich and Republic of Ireland midfielder Wes Hoolahan, 36, is training with West Brom and could join on a free transfer. (Eastern Daily Press)

The Premier League will trial a video assistant referee system at 15 matches this season after the international break. (Sky Sports)

Barcelona's 30-year-old Croatia midfielder Ivan Rakitic says "some big clubs" wanted to sign him this summer, but he decided to stay in Spain. (Novi List - in Croatian)

Portuguese club Benfica could be banned from playing for up to three years after being accused of a complex series of crimes involving the alleged infiltration of the country's judicial system. (Correio da Manha - in Portuguese)

Fulham want to give their 26-year-old England U21 goalkeeper Marcus Bettinelli a new contract. (Sun)

The Football Association is set to benefit financially from an increase in the England team's brand appeal following the World Cup. (Telegraph) 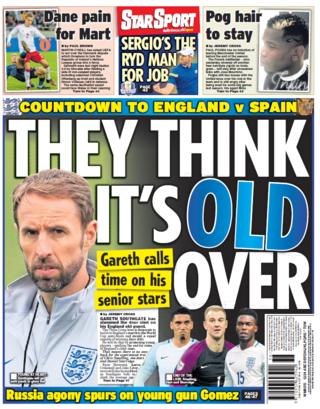 Daily Star back page on Thursday