Former Arsenal shareholder Alisher Usmanov is considering a move for Charlton Athletic after cashing in his Gunners shares, worth £600m (Mirror)

Italy midfielder Jorginho's agent has confirmed that the 26-year-old agreed to join Manchester City in the summer but ultimately signed for Chelsea because City failed to negotiate a deal with Napoli. (Metro)

Real Madrid's 22-year-old Spain midfielder Dani Ceballos says he would have left the club if Zinedine Zidane had stayed as manager. (Marca)

What next for Spain?

Liverpool and England midfielder Jordan Henderson, 28, says he watched a replay of this summer's World Cup semi-final defeat by Croatia because he wanted to learn as much as he could from it. (Evening Standard)

Tottenham's 27-year-old England full-back Kieran Trippier says he has watched his goal from that game "about 100 times". (Sun)

Meanwhile, 22-year-old midfielder Dele Alli - Trippier's club and international team-mate - believes England can win Euro 2020 because the players "feel like there are no limits".(Mirror)

Manchester City have beaten Tottenham and Chelsea to the signing of 16-year-old Irish goalkeeper Gavin Bazunu for £420,000 from Shamrock Rovers. (Telegraph)

Real Madrid's 25-year-old midfielder Isco refused to answer a question at a Spain news conference, telling the reporter: "You will write what you want anyway, so why should I answer? We don't need people who are constantly criticising us." (El Pais - in Spanish)

Spain manager Luis Enrique is getting tough with his players in an effort to get them back into shape after their early exit from the World Cup - including banning late-night cards and video games. (Star)

Wolfsburg have terminated Kaylen Hinds' contract after the 20-year-old English ex-Arsenal forward disappeared earlier this summer, claiming to have had problems with his passport. (ESPN)

Tottenham will offer season-ticket holders and members the right to buy three extra tickets for their home match with Liverpool amid fears some fans are boycotting matches at Wembley. (Times - subscription required)

Spurs have been granted special dispensation by the EFL to play their Carabao Cup third-round tie against Watford later this month at League Two side Milton Keynes Dons' Stadium MK. (Independent)

Everton and England goalkeeper Jordan Pickford, 24, says he will not take risks like his 25-year-old Liverpool counterpart and Brazil international Alisson.(Mail)

Former Southampton and Italy striker Dani Osvaldo, 32, says he gave up football to become a singer in a band because he "likes to be free". (Sun)

Burnley coach Michael Duff is set to be named as the new manager of Cheltenham Town. (Gloucestershire Live)

A stray dog has become the unofficial assistant manager of a Paraguayan club Sporting Club 2 de Mayo. (Cronica - in Spanish) 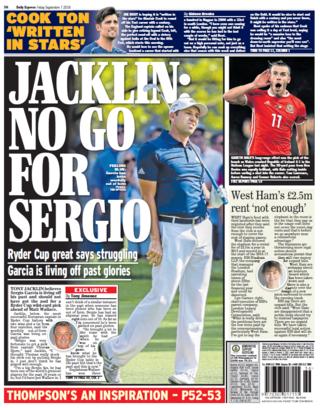 Daily Express back page on Friday