England boss Gareth Southgate is in no rush to sign a new contract despite the Football Association's willingness to give him a significant pay rise. Southgate's existing deal expires in 2020. (Times - subscription required)

Chelsea's 32-year-old English defender Gary Cahill could leave the club in January unless he gets more more first-team football. (Sun)

Liverpool have no interest in signing France and Paris St-Germain midfielder Adrien Rabiot, 23, despite reports linking the Reds with the four-time Ligue 1 winner. (Liverpool Echo)

How Football Focus viewer alerted me to cancer scare

Why Lawro is trying to track down viewer

Tottenham and Belgium defender Jan Vertonghen, 31, is set to sign a one-year extension to his deal, which is due to expire at the end of the season. (Sun)

The reason Manchester City's 22-year-old winger Leroy Sane has left Germany's squad before Sunday's friendly with Peru is because his partner is due to give birth. (Bild, via Mirror)

Former Chelsea and England defender John Terry, 37, says he wants to carry on playing and has got "three or four offers on the table - domestically or abroad". Terry, who played for Aston Villa last season, will make a decision in the next two weeks. (Mail)

Barcelona and Chelsea are tracking Fulham's 15-year-old English midfielder Harvey Elliott, who has been training with the first team during the international break. (London Evening Standard)

Birmingham City, who are 20th in the Championship with four points, are facing a 12-point deduction for breaking rules on spending, in a landmark case for the English Football League. (Telegraph)

Manchester City have beaten Chelsea and Tottenham to the signing of 16-year-old Irish goalkeeper Gavin Bazunu from Shamrock Rovers. (Sun)

Real Madrid and Spain defender Sergio Ramos, 32, said he did not mean to injure Liverpool's 26-year-old Egypt forward Mohamed Salah in the Champions League final and his "conscience is really clear about what I did that night". (Telegraph)

Liverpool's Brazil midfielder Fabinho, 24, says he is ready to make his first Premier League appearance after failing to play a match since signing for £44m from Monaco. (Sky Sports)

Leicester City fans want a stand to be named after Claudio Ranieri, the Italian who led them to the Premier League title in 2016, as well as a statue to be built. (Leicester Mercury)

Notts County manager Harry Kewell says he has ambitions to manage former club Liverpool but his "biggest challenger would probably be Steven [Gerrard]".

Fans of Blackpool and Charlton Athletic are to take their protests against their respective clubs' owners directly to the EFL, with street demonstrations planned outside the league's offices in London and Preston. (Times)

A Coventry City fans' group is relaunching its campaign to help secure the club's future, with the League One side in danger of becoming homeless at the end of this season. (Coventry Telegraph)

West Bromwich Albion players are taking it in turns to pick the music before each home game this season. (Express & Star)

Girona have accepted the proposal to play their scheduled home La Liga match against Barcelona in Miami in January. (Football Espana)

Fans of Girona will be offered free flights to the game, set to take place at Miami Dolphins' 65,000-capacity Hard Rock Stadium. (Guardian) 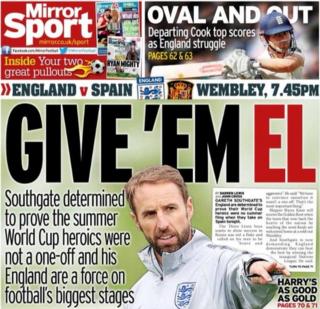