Former Real Madrid boss Zinedine Zidane has been preparing a list of transfer targets in case he is asked to replaced Jose Mourinho as Manchester United manager. (Sunday Mirror)

United's former France forward Eric Cantona says Mourinho "has a good personality, but not for United", adding that the Old Trafford outfit "should have [Pep] Guardiola as coach". (Mail on Sunday)

Alternatively, Terry will sign a two-year contract after passing a medical in Italy. (Observer)

Terry is set to earn £1.8m a year after tax in the Russian capital. (Sunday Telegraph)

How England were brought back down to earth by impressive Spain...

Former Manchester United and Netherlands keeper Edwin van der Sar says it is "nonsense" he could be returning to the club as director of football, a position he holds at Dutch side Ajax. (Sun on Sunday)

Atletico Madrid's 27-year-old France forward Antoine Griezmann says he would like to finish his career in the MLS - at either LA Galaxy or David Beckham's new team Inter Miami. (L'Equipe - in French)

Work on modernising Real Madrid's Santiago Bernabeu ground will begin before the end of the year. (Marca - in Spanish)

English clubs might consider the January transfer window as their last chance to sign top young European players before Brexit potentially makes it more difficult to do so. (Sunday Telegraph)

Leicester City's England Under-21 left-back Ben Chilwell, 21, says his preparations for this season involved "minging running" in the summer and cutting out alcohol. (Mail on Sunday)

Chelsea and Germany defender Antonio Rudiger, 25, says he "favours" the style of new Blues boss Maurizio Sarri because he "wants us to press high compared to last season when everyone knows we sat back" under previous manager Antonio Conte. (Mail on Sunday) 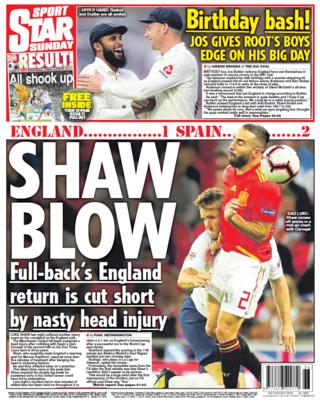 'Vintage on the track, statesman off it - Hamilton’s black power salute the perfect emblem'

Read more on 'Vintage on the track, statesman off it - Hamilton’s black power salute the perfect emblem'

Read more on How to get into football