Tottenham and Barcelona have both had offers rejected for Ajax's 21-year-old Netherlands midfielder Frenkie de Jong. (Mundo Deportivo - in Spanish)

Manchester United's 23-year-old England full-back Luke Shaw is keeping his club waiting over a new contract. His current deal expires at the end of the season. (Sun)

Shaw is set to return to United's medical team on Monday having suffered concussion in England's 2-1 Nations League defeat by Spain on Saturday. (Mail)

... but why did people not know about it?

United's France midfielder Paul Pogba, 25, says there have "always been little things" between him and Jose Mourinho, but their "relationship is still the same". (TF1, via Express)

West Ham are backing manager Manuel Pellegrini to turn their form around after a poor start to the season. (Sun)

Former Chelsea defender John Terry, 37, is set to join Spartak Moscow but will miss out on a reunion with ex-England team-mate Steven Gerrard - now manager of Rangers, who the Russian side have drawn in the Europa League group stage - because Uefa says he has missed their deadline for registering players for the competition. (Mirror)

Premier League clubs will agree to set next summer's transfer deadline back to 31 August. (Sun)

There is concern Southgate will leave his job after Euro 2020 because he has not yet extended his contact. (Mail)

Mario Lemina, Southampton 25-year-old Gabonese midfielder, has had his 'UK record' £96,425 speeding fine reduced to £2,000 because he was sentenced under guidelines for the wrong charge. (Southern Daily Echo)

Birmingham City would be able to appeal and negotiate over any points deduction for breaching Financial Fair Play rules. (Birmingham Mail) 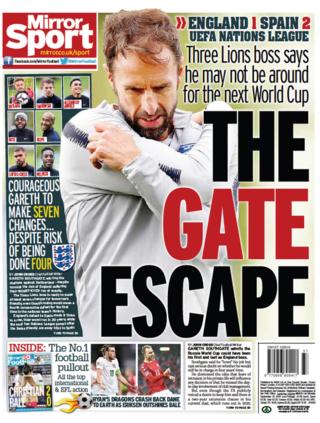 Daily Mirror back page on Monday