England and Tottenham midfielder Dele Alli, 22, is close to signing a new contract with the club. (Sky Sports)

Leicester striker Jamie Vardy, 31, is angry with manager Claude Puel, who is considering dropping the Englishman for Saturday's game against West Ham. (Telegraph)

A group of Manchester United players are set to be fined by the club after they refused to turn up to a sponsor's event in protest at the transport problems the team has suffered before Champions League fixtures. (Mail)

Meanwhile, United boss Jose Mourinho wanted his players to join him in walking from the team hotel to Old Trafford after their bus was stuck in traffic for the Champions League game against Juventus, but security staff veteod the move. (Mail)

Tottenham could sign Brazilian forward Malcom, 21, from Barcelona as he struggles to compete for a place with Philippe Coutinho and Ousmane Dembele. (Corriere dello Sport - in Spanish)

El Clasico: When a pig's head landed at the Nou Camp...

Newcastle boss Rafael Benitez, who will be out of contract in the summer, has suggested he could be in charge next season despite the team occupying bottom place in the Premier League. (Mirror)

Should Benitez leave, Newcastle are considering a move for former Monaco manager Leonardo Jardim despite interest from Leicester. (le10sport - in French)

Meanwhile, Newcastle midfielder Jonjo Shelvey, 26, was hurt not to be called up to England's World Cup squad and has given up hope on playing for his country again. (Telegraph, subscription required)

Wales midfielder Aaron Ramsey, 27, is resigned to leaving Arsenal in the summer but has ruled out a move to rivals Tottenham. (Sun)

Ramsey has also said he still does not know why Arsenal unexpectedly withdrew their offer of a new four-year contract. (Evening Standard)

Burnley goalkeeper Joe Hart, 31, has also revealed how "painful" it was to be left out of the World Cup squad, and took himself out of the team WhatsApp group, but wants to play for England again. (Times - subscription required)

Manchester United have had their hopes of signing Spanish left-back Jordi Alba in January boosted as Barcelona may wait until the end of the season to offer the 29-year-old a new contract. (Diario Sport - in Spanish)

Chelsea and England midfielder Ruben Loftus-Cheek, 22, has hinted he will no longer seek a loan move in January because he wants to continue to learn from manager Maurizio Sarri. (Evening Standard)

Meanwhile, West Ham could pay up to £33m for Paraguay midfielder Miguel Almiron, 24, from Atlanta United. (Ultima Hora - in Spanish)

Bayern Munich have joined Manchester United in the race for Fiorentina defender Nikola Milenkovic. But the 21-year-old Serb will not be sold for less than £50m. (Calciomercato - in Italian)

Top European clubs are in talks about a pact to control the escalation of wages, as fears grow about players' salaries spiralling out of control. (Sun)

Napoli manager Carlo Ancelotti says he was surprised to have been offered the job. (FourFourTwo) 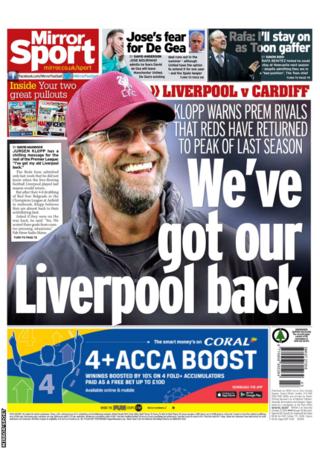