Real Madrid want Tottenham boss Mauricio Pochettino, 46, to be their new manager by the end of next month. The Spanish giants sacked Julen Lopetegui on Monday after four and a half months in charge. (Sun)

Conte's failure to agree terms with Real could cost Chelsea more than £7m, as the Italian coach continues to pursue his former club for damages after his sacking. (Times - subscription required)

Besiktas want 25-year-old German keeper Loris Karius - who has signed a two-year loan deal with the Turkish club - to return to Liverpool in January and for Belgium striker Divock Origi, 23, to join them instead. (90 Minutes)

Why Rashford needs a run at centre-forward

Manager Jose Mourinho will be backed in January to strengthen his Manchester United squad if the right deal is possible, with more than £100m potentially available. (Guardian)

Liverpool owner John W. Henry believes the club is on course for "a special season" after claiming manager Jürgen Klopp has solved their long-standing issues in defence. (Telegraph)

Vichai Srivaddhanaprabha's son Aiyawatt, who first interviewed Premier League-winning manager Claudio Ranieri before his appointment, is likely to lead Leicester City forward after the helicopter crash in which his father and four other people died. (Mail)

Leicester players will decide whether to postpone their Premier League clash at Cardiff, scheduled for Saturday, after the club owner's death. (Mirror)

Many Leicester players have undertaken sessions with grief counsellors as the emotional impact of Srivaddhanaprabha's death hits home. (Telegraph)

Barcelona's France forward Ousmane Dembele could be allowed to leave in January and Chelsea, Liverpool and Arsenal have been linked with the 21-year-old. (Sun)

Juventus are keen to sign 21-year-old Serbia defender Nikola Milenkovic, who is thought to be a target for Tottenham and Manchester United. Juve are also interested in Italy midfielder Federico Chiesa but Fiorentina are likely to demand in excess of 100m euros (£89m) for the 21-year-old and Milenkovic. (Calciomercato)

Former Aston Villa boss Steve Bruce is being linked with Reading, with the Royals 22nd in the Championship under Paul Clement. (Birmingham Mail)

Bournemouth manager Eddie Howe has assured former England striker Jermain Defoe that he still has a future at Bournemouth despite the 36-year-old striker making only three late Premier League appearances so far this season. (Mirror)

Manchester United have not contacted RB Leipzig's director of football Paul Mitchell about a similar role they want to introduce at Old Trafford - but the former Tottenham head of recruitment is flattered by the speculation. (Sun)

Liverpool's Brazil midfielder Fabinho, 25, says he has had problems settling in at times since his £39m summer move to Anfield from Monaco. (ESPN)

Lyon's Netherlands and former Manchester United winger Memphis Depay, 24, claims he does not feel like a respected player. (ESPN)

Manager Rafael Benitez insists Newcastle are out of luck rather than out of form. The Magpies have failed to win any of their opening 10 league matches this season. (Newcastle Chronicle) 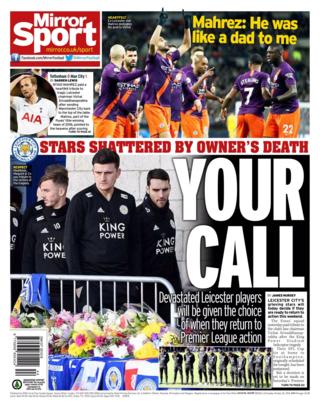 The back page of Tuesday's Mirror