Chelsea are having second thoughts about making a move for Arsenal midfielder Aaron Ramsey because of the impressive form of England internationals Ross Barkley, 24, and Ruben Loftus-Cheek, 22. (Star)

Meanwhile, Liverpool have ruled out making a move for 27-year-old Wales international Ramsey, who is set to leave the Gunners for free in the summer. (Sky Sports)

Spanish midfielder Cesc Fabregas, 31, will have to wait until the new year before new contract talks at Chelsea will begin. (Evening Standard)

Liverpool are set to offer England defender Joe Gomez, 21, a new contract despite having three and a half years remaining on his current deal. (Mirror)

Brazil midfielder Fabinho could be set to leave Liverpool for Paris St-Germain just six months after moving to Anfield because he is "bored". (Le Parisien - in French)

Belgium boss Roberto Martinez said "we won't waste our time on that" when asked reports about Real Madrid being interested in hiring him as their new manager. (VTM Nieuws, via AS)

But Manchester City manager Pep Guardiola says the club "will do absolutely everything to keep" the 19-year-old at Etihad Stadium. (Manchester Evening News)

Life as a football interpreter...

Tottenham midfielder Dele Alli, 22, says "it's not all about winning trophies for me yet at my age" having signed a new six-year deal with Spurs earlier this week. (Telegraph)

Manchester United's Belgium striker Romelu Lukaku, 25, is expected to start for the club in the Premier League game against Bournemouth on Saturday, after being dropped last weekend. (Mirror)

Liverpool fans have raised £60,000 for injured supported Sean Cox, who was attacked by Roma fans outside Anfield before the first leg of April's Champions League semi-final. (Independent)

Football's lawmakers could discuss a change to clarify the handball rule and take out the word "deliberately". (Telegraph)

Fulham's players will have to take a wage cut if they are relegated from the Premier League. (Mail) 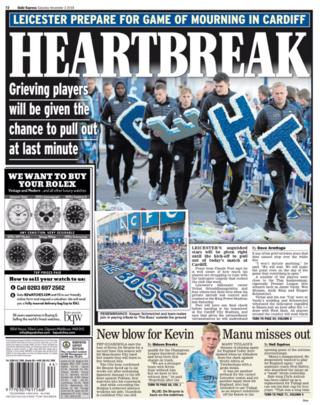