Manchester United executive vice-chairman Ed Woodward feared a number of players would try to force their way out of the club if manager Jose Mourinho had not been sacked. (Mirror)

Chile forward Alexis Sanchez, 30, sent his Manchester United team-mates a WhatsApp suggesting he had won a £20,000 bet on Mourinho losing his job. (Sun)

Switzerland forward Xherdan Shaqiri, 27, says he got messages from his friends saying he was to blame for Mourinho's sacking, after scoring twice as Liverpool beat United in the Portuguese's final game. (Guardian)

Real Madrid are not looking to bring back former Manchester United boss Mourinho, 55, in the short or long term. (Marca)

Liverpool will rival Bayern Munich for the signing of 22-year-old RB Leipzig and Germany striker Timo Werner. (Abendzeitung, via Metro)

Arsenal want to sell their highest-earning player Mesut Ozil, who is under contract until 2021, but may find it difficult to offload the 30-year-old former Germany midfielder. (Mirror)

Could Tottenham have the worst of the Christmas fixtures?

Napoli president Aurelio de Laurentiis says Senegal defender Kalidou Koulibaly, 27, will not be sold to Manchester United next month but the Italian may have to accept a future offer. (Corriere del Mezzogiorno, via Star)

Welsh former West Ham defender James Collins, 35, tore up a £50,000 contract at Aston Villa after injuring himself in training an hour after signing it. (Mirror)

Brazil midfielder Fred, 25, is determined to fight for his Manchester United future, having been frozen out by former manager Jose Mourinho. (Telegraph)

Leicester boss Claude Puel has hinted that he may allow English midfielder Hamza Choudhury, 21, to go out on loan to continue his development. (Leicester Mercury)

Nottingham Forest boss Aitor Karanka has told English winger Joe Lolley, 26, to focus on maintaining his improvement - and not to concern himself with transfer speculation or potential contract talks. (Nottingham Post)

England defender Danny Rose, 28, says Tottenham were motivated for their Carabao Cup quarter-final win over Arsenal after the Gunners "celebrated like they won the league" following their 4-2 Premier League victory this month. (London Evening Standard) 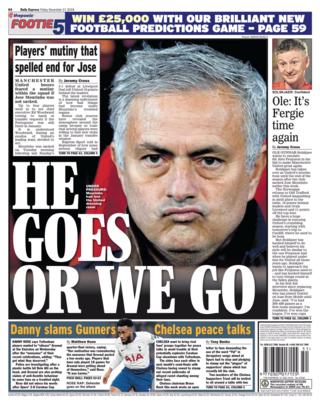