Leicester manager Claude Puel is on the brink of being sacked after losing the support of his players. (Daily Mail)

Sheffield Wednesday are prepared to give former Aston Villa manager Steve Bruce a £2m-a-year contract to replace Jos Luhukay, who was sacked on Friday. (The Sun)

Meet the top-scoring Englishman in Germany

Sarri will not allow Chelsea's England midfielder Ruben Loftus-Cheek, 22, to leave on loan next month. (Guardian)

Monaco boss Thierry Henry wants to sign Chelsea midfielder Cesc Fabregas in January. The Spain international, 31, is unhappy with his lack of game time this season. (L'Equipe via Daily Mirror)

Fulham manager Claudio Ranieri is considering a January move for English right-back Danny Simpson, who played under him at Leicester. The 31-year-old is out of contract next summer. (Daily Mail)

Barcelona manager Ernesto Valverde has revealed a lack of funds is behind the club signing Colombian defender Jeison Murillo, 26, from Valencia on loan. (Express)

Former Fulham manager Slavisa Jokanovic wants a quick return to management just five weeks after being sacked by the Craven Cottage side. (Mirror)

Martin O'Neill, who is about to become a grandfather for the first time, is also keen for a comeback into the managerial ranks after departing the Republic of Ireland post last month. (Telegraph)

Brighton's German midfielder Pascal Gross, 27, has played down speculation of a move to Liverpool or Southampton. (Argus)

Aston Villa have been impressed with the attitude of former West Ham and Wales defender James Collins, 35, and may still offer him a short-term deal if he can get regain fitness. (Birmingham Mail)

Crystal Palace's England international forward Andros Townsend, 27, has been watching clips of Leicester frontman Jamie Vardy as he strives to reinvent himself as a central striker. (London Evening Standard)

West Ham will have a capacity of 60,000 when they host Brighton on 2 January after the club and London Stadium were granted a new safety certificate to increase the number of spectators by 3,000. (Football.London) 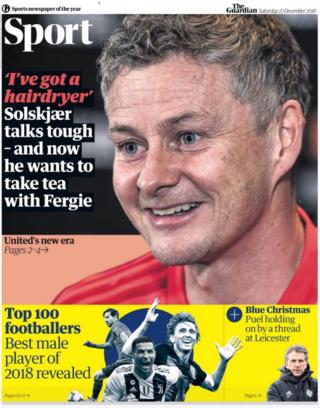 Saturday's edition of the Guardian