Turkish Super Lig side Istanbul Basaksehir could make a bid for Arsenal's Germany midfielder Mesut Ozil, 30. Club president Goksel Gumusdag said they would "do anything to get him". (Bild via FourFourTwo)

The agent of Manchester United midfielder Fred says the 25-year-old will remain at Old Trafford. The Brazilian joined the Premier League club in June but has been linked with a move away. (Daily Star Sunday)

England captain Harry Kane and manager Gareth Southgate are both set to be made OBEs in the New Year's Honours. (Sun on Sunday)

Real Madrid, Barcelona and Bayern Munich are all interested in 18-year-old England forward Jadon Sancho, who is at Borussia Dortmund. (Marca)

Isco, 26, wants to move to Manchester City because the Spain midfielder fears for his place at Real Madrid if they sign 27-year-old Belgium forward Eden Hazard from Chelsea. (Sunday Express)

However, United will only go into the transfer market in January if there is a huge injury crisis at the club. (Sunday Mirror)

Barcelona are ready to make a bid for United and England striker Marcus Rashford, with Real Madrid also keen on the 21-year-old. (Sunday Express)

Fulham owner Shahid Khan will make a new £600m bid to take ownership of Wembley in the new year. (Sun on Sunday)

Lyon's 25-year-old France midfielder Nabil Fekir - who almost joined Liverpool in the summer - is a January target for Chelsea. (Mail on Sunday)

Leicester boss Claude Puel insists he has nothing to prove following his side's shock win at Chelsea, despite rumours he is close to being sacked. (Mail on Sunday)

Tottenham manager Mauricio Pochettino says he has a good relationship with chairman Daniel Levy. The Argentine has been linked with the managerial role at Manchester United. (Sky Sports)

Ex-Manchester United manager Jose Mourinho thought he was going to discuss the club's transfer policy at the meeting where he was sacked. (Times - subscription required)

Leaked memos reveal Tottenham are unhappy with the untidy state of the streets around their new White Hart Lane stadium. (Observer) 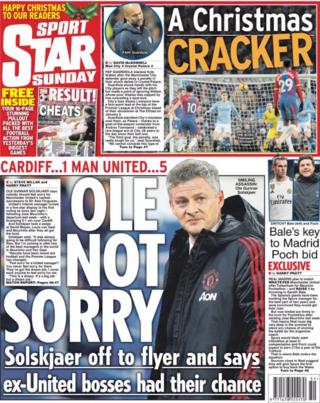 The sport pages of the Sunday Star