Fellow Serie A sides Inter and AC Milan have been priced out of signing 27-year-old Ramsey because he wants an annual salary of £9m. (Calciomercato)

However, German champions Bayern Munich remain interested in signing the Wales international, whose Gunners contract expires at the end of the season. (Mail)

Team of the Week

Arsenal will have to break their transfer record to sign Nicolas Pepe because Lille want £72m for the 23-year-old Ivory Coast winger. (Telefoot, via Metro)

Arsenal and Everton are considering bids for West Ham's English defender Reece Oxford, 20, who has been warned by manager Manuel Pellegrini that he might not have a future at the club. (Mirror)

Paris Saint-Germain are keen on Watford's £30m-rated French midfielder Abdoulaye Doucoure, 25, who is also a target for his former manager Marco Silva at Everton. (Mail)

Crystal Palace and Huddersfield are in the market to sign Liverpool's Dominic Solanke on loan. The English striker, 21, has yet to play for Jurgen Klopp's side this season. (Sky Sports)

Barcelona are leading the race to sign Ajax wonderkid Frenkie de Jong. The 21-year-old Dutch midfielder has been linked with a host of Premier League clubs. (Mundo Deportivo - in Spanish)

Fulham are considering a move for 29-year-old Besiktas and Croatia defender Domagoj Vida. (Fotomac - in Turkish)

Bayern Munich's French winger Franck Ribery, 35, is open to extending his contract for another season. (Sky, via Goal)

Lyon and France midfielder Nabil Fekir, 25, who came close to joining Liverpool in the summer, has been offered a move to Real Madrid. (Marca)

Birmingham City fans are disappointed the club did not receive more tickets for their FA Cup third-round tie at West Ham on 5 January. (Birmingham Mail) 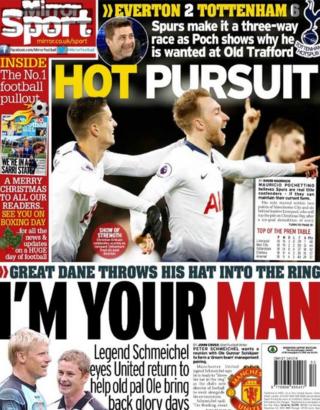