Crystal Palace and Ivory Coast striker Wilfried Zaha, 26, has been offered £11m a year to move to Chinese side Dalian Yifang next month. (Mail)

Brazil forward Neymar is desperate to return to Barcelona from Paris St-Germain - with the 26-year-old's staff making "constant calls" to his former club. (AS via Mirror)

Real Valladolid's 23-year-old Spanish defender Fernando Calero, who is being tipped to join Arsenal, has revealed on social media that he is in London. (Sun)

Timothy Weah, the son of George, is set to join Celtic on loan after the 18-year-old United States forward said he would leave Paris St-Germain for the next six months. (ESPN)

Manchester United are in talks with the agent of one of former manager Jose Mourinho's top transfer targets, Fiorentina's 21-year-old Serbia defender Nikola Milenkovic, and are still keen to bring him to Old Trafford. (La Repubblica via Express)

Reasons to be cheerful

What should we be looking forward to in 2019?

Inter Milan midfielder Radja Nainggolan wants a return to his former side Roma, with the 30-year-old Belgian claiming he is in a "slaughterhouse". (Calcio Mercato)

Tottenham boss Mauricio Pochettino says Denmark midfielder Christian Eriksen, 26 is not distracted by uncertainty surrounding his future with only 18 months remaining on his contract. (Sun)

Chelsea manager Maurizio Sarri says he will have one on one talks with "four or five" of his players to try to solve his side's dip in form. (Express)

American defender DeAndre Yedlin, 25, admits he has to rediscover his best form if he wants to regain his Newcastle United starting place. (Chronicle) 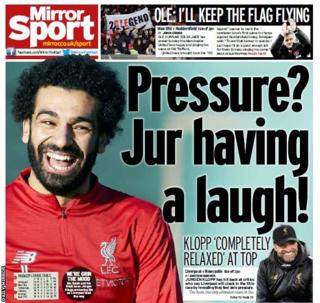