Paris St-Germain have held talks with Arsenal midfielder Aaron Ramsey, 28, about a January move. The Wales international is out of contract at the end of the season. (L'Equipe - in French)

And the French side are readying a £9m bid for Ramsey to ward off interest from Bayern Munich and Juventus. (Mirror)

Manchester City will not try to sign anyone in January, meaning they could miss out on Netherlands midfielder Frenkie de Jong. (The Times)

De Jong has agreed a five-year deal with Barcelona, who will now hope to negotiate a lower fee than the 75m (£67.8m) euros Ajax want for the 21-year-old. (Sport)

Meanwhile, Manchester City boss Pep Guardiola scrapped his squad's day off on Christmas Eve and made them practise corners in an extra training session. (Sun)

Allegri, 51, is keen on the job and has been taking English lessons over the past year with the view to working in the Premier League one day. (The Times)

Manchester United will not announce their new manager before the end of the season. (Talksport)

Manchester United executive vice-chairman Ed Woodward has no intention of selling France midfielder Paul Pogba, 25, in January or the summer despite interest from Juventus and Barcelona. (Telegraph)

Who needs to listen to Souness?

Find out in Garth Crooks' Team of the Week

Eden Hazard is still not prepared to discuss a new contract at Chelsea until the summer, amid interest from Real Madrid in the 27-year-old playmaker. (Sun)

West Ham have offered free agent forward Samir Nasri, 31, an £80,000-a-week contract until the end of the season, with his doping ban set to end on 31 December. (Mirror)

Tottenham striker Harry Kane says his side's success this season justifies them not signing any players in the summer. (ESPN)

Liverpool left-back Alberto Moreno says he is not happy with how he has been treated by manager Jurgen Klopp and wants to return to Spain, with his contract set to expire in June. (Onda Cero, via AS)

Gonzalo Higuain wants to move to Chelsea and Juventus are prepared to sell the 31-year-old striker, who is currently on loan at AC Milan. (Sportmediaset - in Italian)

Nottingham Forest players are "still behind" manager Aitor Karanka, despite the Spaniard's position coming under scrutiny after a poor run of results. (Nottingham Post)

Real Madrid want to sign Real Betis left-back Junior Firpo, 22, as the successor to Marcelo, but face competition from Arsenal and Manchester City. (AS)

A clause in Alex Oxlade-Chamberlain's Arsenal contract meant the Gunners had to pay former club Southampton £10,000 every time the England midfielder played more than 20 minutes in a match. (Mail)

Colombia centre-back Jeison Murillo, 26, wants a permanent move to Barcelona after joining on loan from Valencia until the end of the season and can be signed for 25m euros (£22.6m). (Marca)

Thorgan Hazard - younger brother of Eden - will not be allowed to leave Borussia Monchengladbach in January despite interest from several clubs, including Tottenham, while Chelsea also have a buy-back clause for the 25-year-old this summer. (Bild - in German)

Republic of Ireland boss Mick McCarthy is considering a call-up for Southampton winger Nathan Redmond, despite the 24-year-old having won an England cap in a friendly. (Mail)

Atletico Madrid chief executive Miguel Angel Gil Marin will meet with Bayern Munich in January but will not let France defender Lucas Hernandez, 22, leave until the summer. (Spox - in German) 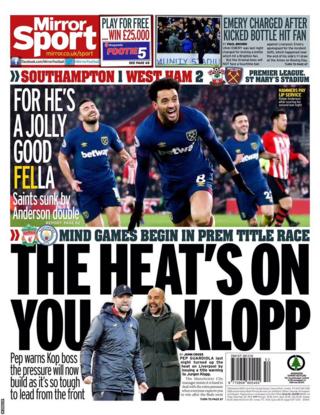