Juventus manager Massimiliano Allegri has been linked with becoming Manchester United manager but he says he is "happy" at the Italian club. (Calciomercato)

Emery says he turned down the chance of signing Mohamed Salah for former club Paris St-Germain as he had doubts about the 26-year-old Liverpool and Egypt forward, who he now considers one of the world's top five players. (Daily Mail)

Sevilla and Argentina midfielder Ever Banega, 30, looks to join Arsenal after his agent flew to London. (Sun)

Croatia midfielder Luka Modric has rejected a new contract at Real Madrid as he seeks a move away from the Bernabeu. The 33-year-old has been linked with Inter Milan. (Telemadrid via AS - in Spanish)

Chelsea's 31-year-old midfielder Cesc Fabregas, whose contract expires in June, is free to talk to other clubs from 1 January and will leave the Stamford Bridge outfit for a club in Europe. (Marca)

AC Milan director of sport Leonardo says Chelsea have not made an approach to sign 31-year-old Argentine striker Gonzalo Higuain, who is on loan at the San Siro club from Juventus. (Evening Standard)

Manchester City midfielder Brahim Diaz is set to leave the club and join Real Madrid in a deal worth £13.5m plus add-ons, with the 19-year-old expected to sign a deal with the Bernabeu side for the next six seasons. (Marca)

Manchester United midfielder Andreas Pereira could look to leave the club unless he gets more playing time, with Arsenal, Everton and West Ham interested in the 22-year-old. (UOL Sports, in Portuguese)

Liverpool have been approached by Portuguese club Sporting Lisbon about signing 18-year-old midfielder Rafa Camacho on loan in January, while a number of Championship sides have also asked about his availability. (Liverpool Echo)

Meanwhile, Liverpool and England Under-21 striker Dominic Solanke, 21, is weighing up a loan move to Crystal Palace having not made an appearance for the Reds this season. (Daily Mail)

Aston Villa have pulled out of a deal to sign Chelsea centre-back Gary Cahill, 33, because of the cost involved. (Daily Telegraph)

Newcastle manager Rafael Benitez says there is "no chance" the club will sell midfielder Jonjo Shelvey, 26, in January, amid rumours of a swap deal involving Fulham midfielder Tom Cairney, 27. (Guardian)

Celtic boss Brendan Rodgers has revealed he was rushed to hospital following his sacking as Liverpool manager in 2015 because he was "so tense". (The Coaches Voice) 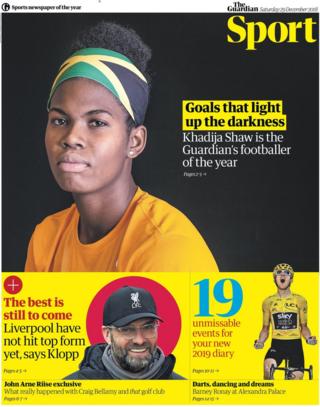 The front page of the Guardian sport supplement