The Blues would be able to sack Sarri for £5m - the cheapest pay-off for a manager since Roman Abramovich bought the club in 2003. (Sun)

Manchester United have made Borussia Dortmund winger Jadon Sancho, 18, their top summer transfer target but feel they would need Champions League football next season to bring the England international back to the Premier League. (Mirror)

Noughty Boys - 'One of the greats'

How did Van Nistelrooy make such a big impact on the game?

Real Madrid president Florentino Perez has set a price of about £131m for clubs interested in 29-year-old Wales forward Gareth Bale, who has been linked with Chelsea and Manchester United. (Telemadrid, via Sun)

Manchester City are set to offer French defender Aymeric Laporte, 24, a new contract as a result of his fine form this season. (Times - subscription required)

Manchester United's 29-year-old Spanish midfielder Ander Herrera, who is out of contract in the summer, is expected to sign a new three-year deal with the club worth £100,000 a week. (Sun)

United are still hopeful of agreeing a new contract with Spain goalkeeper David de Gea, 28, but there are concerns that agents' fees are driving up the price. (ESPN)

Arsenal are monitoring developments with Burnley's 26-year-old Englandgoalkeeper Nick Pope as they assess replacements for 36-year-old Czech Petr Cech, who will retire at the end of the season. (Mail)

Manchester City are close to agreeing a deal with Espanyol for their 16-year-old Spanish left-sided player Oscar Tarensi which could cost an initial £260,000 in compensation. (Mail)

Real Madrid are in the advanced stages of finalising a deal to sign 21-year-old Brazilian defender Eder Militao from Portuguese side Porto.(Marca) 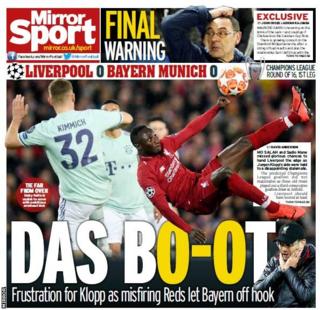