Real Madrid could let Wales forward Gareth Bale leave in the summer - and may use the 29-year-old as part of a deal for Chelsea and Belgium forward Eden Hazard, 28, or Tottenham and Denmark midfielder Christian Eriksen, 27. (Marca)

Paris St-Germain are planning a move for Chelsea's England Under-19 forward Callum Hudson-Odoi, 18, who is also a target for Bayern Munich. (Sun)

Former France and Paris St-Germain coach Laurent Blanc will be among the contenders to replace Maurizio Sarri if Chelsea decide to sack the Italian next week. (London Evening Standard)

Who would make your Man Utd-Liverpool combined XI?

Barcelona are in talks over selling Croatia midfielder Ivan Rakitic to Italian club Inter Milan, with the Spanish club wanting about £39m for the 30-year-old. (AS)

Arsenal's hopes of signing Colombia forward James Rodriguez have been dealt a blow with the 27-year-old, who is on loan at Bayern Munich, suggesting he will return to parent club Real Madrid at the end of the season. (Mirror)

Former Arsenal midfielder Patrick Vieira, 42, is being monitored by Lyon after impressing as Nice manager. (Sun)

Paraguay attacking midfielder Miguel Almiron was being tracked by Manchester United before joining Newcastle, according to the 25-year-old's agent. (Newcastle Chronicle)

Tottenham are hoping to take a significant step towards opening their new 62,062 stadium this season, with test events proposed for 16 and 23 March. (London Evening Standard)

Chelsea and Liverpool are monitoring 17-year-old Khephren Thuram - the son of former France international Lilian Thuram. The France Under-18 international is yet to sign professional terms at Monaco. (Mail)

Leicester City's Croat defender Filip Benkovic, 21, has reaffirmed his intention to return to the Foxes next season after a loan spell at Celtic. (Leicester Mercury)

Reading and Nigeria forward Sone Aluko, 30, is finalising a move to Chinese side Beijing Renhe. (Mail)

AC Milan want Celtic target Timothy Castagne after being impressed with the 23-year-old Belgium full-back's performances for Atalanta in Serie A. (Inside Futbol)

West Ham midfielder Manuel Lanzini, 26, could make his return from a serious knee injury by making his first appearance of the season for the Hammers against Fulham on Friday. (Times - subscription required)

Liverpool are set to tour North America rather than Asia this summer. (Liverpool Echo)

Leeds United's season is being captured by a film company based in the city and could land the club a documentary deal. (Mail) 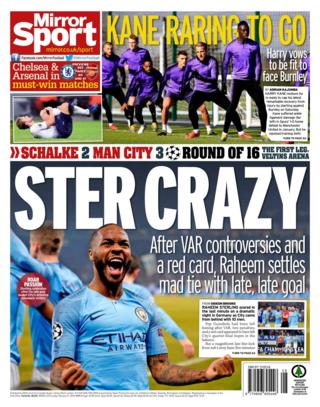 In the Daily Mirror, "Ster Crazy"