Real Madrid forward Gareth Bale, 29, has no interest in returning to the Premier League and the Wales international wants to see out his contract at the Bernabeu, which expires in 2022. (AS)

Slovakia centre-back Milan Skriniar, 24, has been linked with United but says he is close to signing a new contract with Italian club Inter Milan. (CalcioMercato.com)

A tale of two keepers

How De Gea and Alisson became stars of the Premier League...

Derby County manager Frank Lampard says he is not surprised he has been linked with replacing Chelsea manager Maurizio Sarri at his former club, but added that he is focusing on his job with the Rams. (Mirror)

Atletcio Madrid goalkeeper Jan Oblak, 26, is set to sign a new contract with the La Liga club that will increase the Slovenia international's release clause from 100m euros (£87m). (AS)

Manager Claude Puel has held talks with Leicester vice-captain Kasper Schmeichel after the keeper's father - Manchester United great Peter Schmeichel - suggested his son wants to play for a bigger team and that Puel is unable to inspire his players. (Leicester Mercury)

Fulham's Spanish goalkeeper Sergio Rico, 25, says he would like to stay at the conclusion of his loan from Sevilla. (Sky Sports)

Barcelona are tracking Lille and Ivory Coast winger Nicolas Pepe, 23, who has been a target for Arsenal. (Sport)

Liverpool Under-18 captain Paul Glatzel, 18, has signed his first professional contract after scoring 23 times for the youth team this season. (Liverpool Echo)

Stoke are exploring the possibility of sacking Burundi forward Saido Berahino amid the fallout from the 25-year-old's drink-driving case. (Mail)

Mallorca's Spanish defender Antonio Raillo, 27, says he turned down "a really good opportunity" to sign for Nottingham Forest in the January transfer window. (AS, via Nottingham Post)

Meanwhile, United's FA Cup quarter-final against Wolves has complicated plans to hold the Old Trafford derby against Manchester City in the first week of April. (ESPN)

Tottenham boss Mauricio Pochettino hopes to take his team away on a warm-weather training camp next month during a period in which they may have three weeks without a fixture. (Football.London)

A new wording on the handball rule is set to be brought in by football's lawmakers and it "will significantly reduce the grey areas" around the offence. (Times - subscription required) 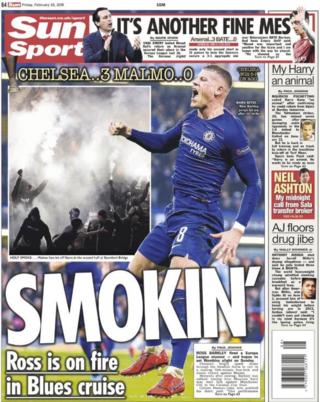 The back page of Friday's Sun