Former Real Madrid coach Zinedine Zidane will not be deterred by Chelsea's transfer ban and is in line to become the new boss at Stamford Bridge. He could have £200m to spend during the Blues' appeal. (Sun)

Or Chelsea could turn to England assistant manager Steve Holland if they sack head coach Maurizio Sarri next week. (Telegraph)

Arsenal have offered the job of technical director to Roma's Monchi. The Spaniard, 50, worked with Gunners boss Unai Emery at Sevilla. (Mirror)

Napoli are close to signing Arsenal and Colombia goalkeeper David Ospina, 30, on a permanent basis. (Calciomercato)

Inter Milan's 24-year-old Slovakia defender Milan Skriniar - a target for Manchester United - is close to agreeing a new contract with the Serie A club.(Sky Italia, via Calciomercato)

Paris St-Germain's 23-year-old France midfielder Adrien Rabiot - linked with Tottenham and Liverpool - has replaced his mother with a new agent following his failed move to Barcelona. (Sport, via Talksport)

Bayern Munich are favourites to sign Lille's 23-year-old Ivory Coast striker Nicolas Pepe. Arsenal, PSG and Barcelona are also keen on the forward, who has scored 16 goals and made eight assists for the French club this season. (Le10 Sport - in French)

Everton have made an approach to sign PSG right-back Thomas Meunier, 27. The Belgium international has only started 13 games this season for Thomas Tuchel's side. (Le10 Sport, via Sun)

West Brom's China striker Zhang Yuning, 22, has been released from his loan spell at Dutch club ADO Den Haag and will now join a club in his homeland. (Express and Star)

Huddersfield could be Tottenham's first opponents in the redeveloped White Hart Lane. Spurs have pencilled in their match with Brighton on 6 April to be their first game at the new ground - but the Seagulls could be in FA Cup action that weekend. (Yorkshire Post)

ITV has won the rights to show one Spanish La Liga match per week until the end of the season - but the deal does not include next week's El Clasico between Barcelona and Real Madrid. (Mail) 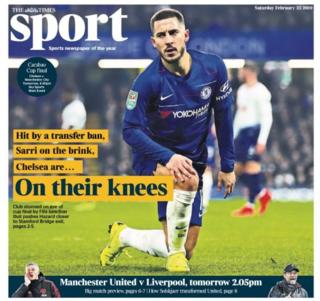 In the Times, "Chelsea are on their knees"