Arsenal head the chase for Crystal Palace right-back Aaron Wan-Bissaka, 21, who is rated at £40m. (Sun)

Newcastle are prepared to break their transfer record and have agreed a £51m deal to sign Brazilian striker Joelinton, 22, from Hoffenheim in the summer. (Sport1, via Star)

Barcelona are ready to bid 110m euros (£95m) for Atletico Madrid midfielder Saul Niguez, 24, who has also been linked with Chelsea. (AS)

Barcelona midfielder Ivan Rakitic, 30, says he wants to stay at the Nou Camp after facing questions about a potential exit. (Marca)

Ole Gunnar Solskjaer says Manchester United midfielder Paul Pogba, 25, made himself a target for critics with his flamboyant lifestyle. (Express)

Arsenal are set to hire Roma sporting director Monchi when his contract expires at the end of June. (Star)

Burnley and England keeper Joe Hart, 31, could be set for a move to Major League Soccer in the United States. (Sun)

Striker Salomon Rondon, 29, on loan at Newcastle from West Brom, has revealed he is happy to remain with the Magpies beyond this season. (Newcastle Chronicle)

Everton have made an approach to sign Paris St-Germain defender Thomas Meunier, 27. (Le10Sport, via Talksport)

Arsenal want to bring in their former winger Marc Overmars as their technical director but the move is being blocked by his current club Ajax. (Mirror)

Arsenal will offer defender Rob Holding, 23, a new deal after he suffered a long-term injury in December. (Mirror)

Brazil international full-back Marcelo is ready to leave Real Madrid and Juventus are interested in signing the 30-year-old. (Calciomercato)

Leicester manager Claude Puel has pleaded with Foxes fans to stick with his young side after they lost their fourth consecutive home game. (Leicester Mercury)

Former Premier League official Mark Clattenburg will return to full-time refereeing in the Chinese Super League from 1 March having completed a two-year stay as director of refereeing in Saudi Arabia. (Mail) 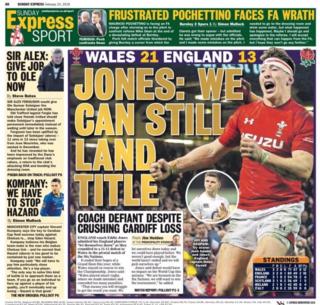 In the Sunday Express, "Sir Alex: Give job to Ole now"