Former Huddersfield boss David Wagner is also among the targets to take over at the King Power Stadium. (Huddersfield Examiner)

Has Sarri been fatally undermined by Kepa's defiance?

Liverpool and Arsenal's efforts to sign PSG and France midfielder Adrien Rabiot, 23, appear to have been given a boost after Barcelona cooled their interest. (Mirror)

Bayern Munich president Uli Hoeness says a decision on the future of 27-year-old Colombia midfielder James Rodriguez, whose two-year loan from Real Madrid finishes at the end of the season, will be in the hands of manager Niko Kovac. (Goal)

Manchester United have been linked with a summer move for Sporting's Portuguese midfielder Bruno Fernandes, 24. (A Bola, via Manchester Evening News)

Wolves captain Conor Coady says he is doing all he can to persuade Mexico striker Raul Jimenez, 29, to make his loan deal at the club permanent. (Express and Star)

French side Lille are prepared to sell 23-year-old Ivory Coast winger Nicolas Pepe, who has been an Arsenal target, if the price is right. (Telefoot, via Football London)

Burnley's England-born forward Ashley Barnes could pledge his international future to Austria - the 29-year-old qualifies through his maternal grandmother. (Mail)

Portuguese Mourinho, 56, plans to be back in management this summer. (ESPN)

Manchester United staff gave special instructions to the ball boys at Old Trafford to slow down in giving the ball back to Liverpool during Sunday's 0-0 draw. (Mail) 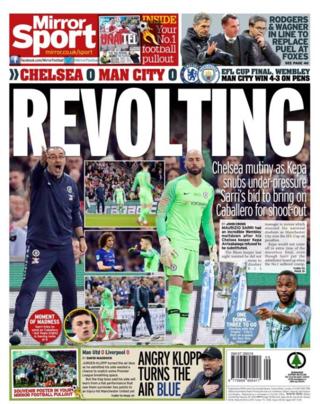 In the Daily Mirror, "Revolting"