Former Manchester United manager Jose Mourinho,who was sacked by the Old Trafford club in December, says he wants his next job to be somewhere with the "right structure" because the 56-year-old Portuguese "doesn't want an internal conflict". (Telegraph)

Leicester City are stepping up attempts to hire Celtic boss Brendan Rodgers as their manager immediately, after sacking Claude Puel on Sunday. (Guardian)

However, the Foxes are "keeping all options open" as they look to replace the Frenchman and could appoint an interim boss until the end of the season. (Leicester Mercury)

Former Borussia Dortmund manager Peter Stoger, who has been out of work since leaving the German side in May, is a candidate to become Puel's full-time successor, according to a source close to the Austrian. (Leicester Mercury)

Burnley manager Sean Dyche has played down speculation he could be targeted by Leicester.(Burnley Express)

Football in Madrid – but not as you know it...

Chelsea manager Maurizio Sarri screamed at goalkeeper Kepa Arrizabalaga in the Wembley dressing room for refusing to be substituted in the Carabao Cup final. (Sun)

Sunday's incident has left many of the 24-year-old Spaniard's Blues team-mates angry with him. (Express)

Manchester United and Chelsea are targeting a summer move for AC Milan captain Alessio Romagnoli - but they will face competition for the 24-year-old Italian centre-back from Serie A champions Juventus.(Calciomercato, via Manchester Evening News)

Leeds United owner Andrea Radrizzani will have to consider selling the club if they fail to win promotion to the Premier League - because he would find it difficult to fund another season in the Championship. (Mail)

Chelsea are set to sell Englishman Kasey Palmer for £4m, despite the 22-year-old midfielder never playing for the senior side, as Bristol City look to make his loan deal permanent. (Sun)

Crystal Palace's France defender Mamadou Sakho, 29, has spoken about having to sleep rough on the streets of Paris when he was a child. (Mail) 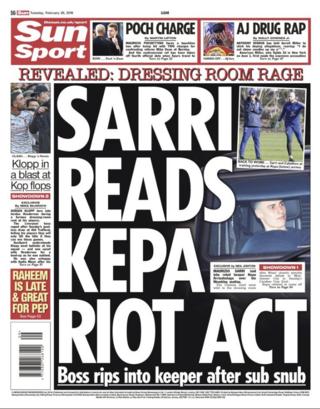