West Ham are set to sign England midfielder Jonjo Shelvey, 27, from Newcastle in the summer. (Sun)

Newcastle United owner Mike Ashley is no longer looking to sell the club after failing to see any realistic offer for the club since putting it up for sale 17 months ago. (Times - subscription required)

New Leicester manager Brendan Rodgers has told England striker Jamie Vardy, 32, he will build his team around him. (Telegraph)

Wins for Manchester's clubs, all square in the north London derby...

What happened in the Premier League on Saturday?

Manchester City will have to fend off AC Milan and Juventus if they are to sign Dinamo Zagreb's 18-year-old winger Antonio Marin. (Calciomercato)

Fifa could prevent Chelsea's plans to launch a £200m summer spending spree before their transfer ban kicks in, which could also stop the Blues chances of bringing in Zinedine Zidane as manager. (Sun)

Manchester City will spend £350m in the summer with manager Pep Guardiola wanting to make four additions to his squad. (Star)

Newcastle and Paraguay striker Miguel Almiron, 25, says he was "ecstatic" when he learned Magpies manager Rafael Benitez wanted to bring him to St James' Park. (BT Sport, via Chronicle)

Manchester United and Sweden defender Victor Lindelof, 24, says he used to pretend he was former United and France goalkeeper Fabian Barthez when playing football as a child - even though, at that time, he played as a number 10. (Mail) 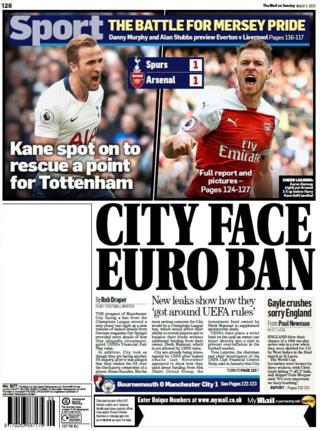