Manchester City will be banned from signing players for two transfer windows by Fifa for breaching rules over the transfer of young players. (Sun)

Liverpool defender Georginio Wijnaldum says he is yet to receive a contract extension offer from the Reds. The 28-year-old has more than two years remaining on his current deal. (Liverpool Echo)

Arsenal and Leicester are both interested in signing Celtic and Scotland defender Kieran Tierney, 21. Leicester want Tierney to replace defender Ben Chilwell as they anticipate bids for the Englishman. (Mirror)

Arsenal have held talks with Rennes over 21-year-old Senegal winger Ismaila Sarr. The Gunnersbeat the French club on Thursday to reach the Europa League quarter-finals. (Goal France - in French)

Burnley will look to sell Nick Pope, 26, for around £10m this summer, with Arsenal keen on the England goalkeeper. (Sun)

Juventus will do everything they can to sign France forward Kylian Mbappe, 20, from Paris St-Germain this summer. (Tuttosport - in Italian)

Newcastle are interested in Lyon boss Bruno Genesio if Rafael Benitez does not extend his contract as manager at St James' Park. (L'Equipe - in French)

But Zidane is not interested in taking Paris St-Germain and Brazil forward Neymar, 27, to the Bernabeu. (AS)

After signing Brazil and Porto defender Eder Militao, Real Madrid already have their maximum of three non-EU players for next year, making it more likely Colombia midfielder James Rodriguez will not rejoin them once his two-year loan at Bayern Munich ends. (Marca)

Real Madrid want to raise 150m euros (£128m) in player sales this summer and will ask for 50m euros (£42.7m) each for Rodriguez and Croatia midfielder Mateo Kovacic, who is on loan at Chelsea. (El Confidencial - in Spanish)

The Spanish giants could put some of that money towards signing 19-year-old Roma midfielder Nicolo Zaniolo. (AS)

Manchester United have joined the race for Paris St-Germain midfielder Adrien Rabiot. The France international is out of contract this summer and has already held talks with Barcelona, Arsenal, Chelsea and Tottenham. (Sun)

Rabiot, 23, has been suspended until the end of March following a nightclub visit after PSG were knocked out of the Champions League by Manchester United. He has not played since December after failing to agree a new contract. (L'Equipe - in French)

Paris St-Germain will offer head coach Thomas Tuchel a one-year extension to his contract. The German signed a two-year deal in May 2018. (L'Equipe - in French)

Former Manchester United manager Jose Mourinho says he is not disappointed after Zinedine Zidane was reappointed at Real Madrid. Mourinho, who was linked with a return to the Spanish side, said Zidane is perfect for the job. (El Chiringuito TV via ESPN) 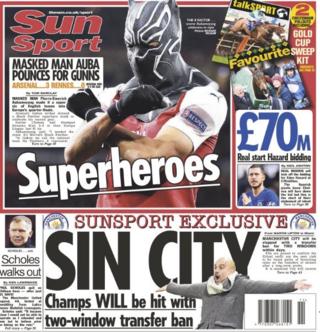 The sport pages of Friday's Sun