Liverpool boss Jurgen Klopp has ruled out a spending spree in the summer, adding that the focus will be on developing a team '100% at its best'. (Mail)

Juventus forward Cristiano Ronaldo, 34, could be facing a ban by Uefa after appearing to swear at Atletico Madrid fans during their Champions League last-16 tie. (La Gazzetta dello Sport - in Italian)

France defender Samuel Umtiti, 25, would like to join Manchester City or Manchester United if he leaves Barcelona this summer. (Calciomercato - in Italian)

Chelsea's French striker Olivier Giroud, 32, says there is no chance he will stay at the club should he continue in his current limited role. (Sun)

And Arsenal are believed to be one of a number of clubs interested in Valencia, after his father said he would definitely not stay in Manchester. (Metro)

The Gunners are in danger of missing out on former Roma sporting director Monchi, after La Liga side Sevilla held productive talks with the 50-year-old Spaniard. (Metro)

However, Arsenal are also thought to be leading the race to sign AC Milan's Spain forward Suso, 25, because of Monchi's imminent arrival. (Mirror)

Newcastle's Slovakian goalkeeper Martin Dubravka, 30, could quit the club amid interest from Juventus and a title-challenging Premier League club. (Chronicle)

Boss Rafaeal Benitez says he is hopeful of persuading midfielder Isaac Hayden to stay at Newcastle, despite the 23-year-old requesting a move in the past two transfer windows. Benitez believes the ex-Arsenal man has the potential to play for England. (Chronicle)

Leicester manager Brendan Rodgers has revealed he tried to bring 22-year-old defender Ben Chilwell to Liverpool when he was managing the Reds. (Mirror) 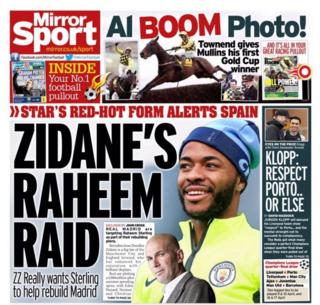 The back page of the Mirror's Saturday edition