France midfielder Paul Pogba, 26, has decided he wants to leave Manchester United this summer and is considering moves to Spain or Italy. (AS - in Spanish)

Real Madrid manager Zinedine Zidane has made Paris St-Germain and France striker Kylian Mbappe, 20, his number one target this summer and could offer around 280m euros (£240.1m). (France Football - in French)

Brazil forward Neymar is in talks with Paris St-Germain over a contract extension, his father has said. The 27-year-old has been linked with a move to Real Madrid. (ESPN)

Manchester United could confirm this week that caretaker manager Ole Gunnar Solskjaer will take over on a permanent basis. (Mail)

Tottenham are set to make a move for Inter Milan winger Ivan Perisic, with the Italian club seeking£30m for the 30-year-old Croatia player. (TuttoMercatoWeb, via Star)

Arsenal are keeping tabs on Guingamp striker Marcus Thuram, the son of former France defender Lillian Thuram. The 21-year-old's contract with the relegation-battling Ligue 1 club expires in the summer and he is also attracting interest from Borussia Dortmund. (Sun)

Benfica want to increase the release cause in Portuguese forward Joao Felix's contract to fend off interest from a number of clubs. Manchester United and Juventus have been linked with a move for the 19-year-old. (Tuttosport - in Italian)

Barcelona will consider selling France defender Samuel Umtiti to Manchester United this summer, despite the 25-year-old wanting to stay at the La Liga club. (Mail)

Manchester United's Spain midfielder Ander Hererra, 29, says it is "logical" he has been linked with a move to Paris St-Germain with only three months remaining on his contract at Old Trafford. (El Periodico - in Spanish)

Arsenal are also interested in signing Hererra on a free transfer in the summer. (Mail)

Chelsea's Denmark defender Andreas Christensen, 22, says players have been told they will not be allowed to leave in the summer if the club's transfer ban is upheld. (Times - subscription required)

Both Tottenham and Arsenal are interested in Ajax's Argentina defender Nicolas Tagliafico. Ajax want £15m for the 26-year-old. (Sun)

Belgium midfielder Yannick Carrasco, 25, who was the subject of a bid from Arsenal in January, says he would "love" to return to Europe from Chinese Super League club Dalian Yifang. (Sun)

Former Liverpool academy player Alexander Kacaniklic says he was accidentally sold to Fulham as part of a swap deal by former manager Roy Hodgson. Hodgson thought a different 'Alex' was being sent to Craven Cottage, with Paul Konchesky joining the Reds. (Metro)

Chelsea's France midfielder N'Golo Kante, 27, says even if Real Madrid manager Zinedine Zidane called him to ask him to join the Spanish club he would stay with the Blues. (Mirror) 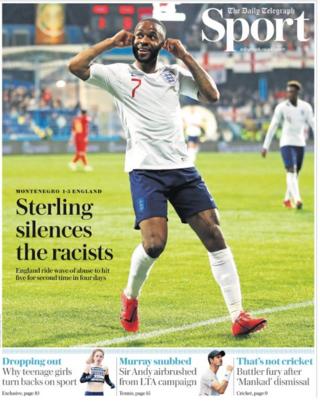 The back page of Tuesday's Telegraph