Chelsea are holding out for a £100m bid from Real Madrid for Belgium midfielder Eden Hazard, 28. (Independent on Sunday)

The Blues have made contact with the representatives of Bayern Munich and Poland striker Robert Lewandowski, 30. Chelsea are also interested in Borussia Dortmund and Sweden forward Alexander Isak, 19. (Sunday Mirror)

Everton keeper Jordan Pickford, 25, and Atletico Madrid stopper Jan Oblak, 26, are on Manchester United's shortlist if they lose De Gea, who is a target for PSG. England international Pickford could cost up to £60m, while Slovenian Oblak may cost a world record fee. (Sunday Express)

Manchester United have been scouting PSG and Belgium right-back Thomas Meunier, 27, since the start of the season. (Sun on Sunday)

Lyon midfielder Tanguy Ndombele is a target for Manchester United, but they face a battle with PSG for the 22-year-old Frenchman. (L'Equipe - in French)

Liverpool could make a move for Lyon and Netherlands forward Memphis Depay, 25, if Senegal winger Sadio Mane, 26, leaves Anfield this summer. (L'Equipe, via Mail on Sunday)

Chelsea manager Maurizio Sarri wants France striker Olivier Giroud to stay at the club. The 32-year-old's Blues deal expires in June but the Stamford Bridge club have the option to extend it by 12 months. (Star on Sunday)

Fulham winger Ryan Sessegnon, 18, could see out the final year of his contract with the club in the Championship next season and then sign for German club Borussia Dortmund, who would just have to pay training compensation for the England Under-21 international. (Sun on Sunday)

Bayern Munich and Netherlands winger Arjen Robben, 35, could snub a move to Inter Milan in favour of a switch to the MLS. (Calciomercato)

Newcastle United manager Rafael Benitez says he is "not too close" to resolving his future at St James' Park. (Sky Sports)

Bournemouth boss Eddie Howe says Scotland winger Ryan Fraser may not be at the club next season. The 25-year-old is a target for Arsenal. (Sun on Sunday)

QPR have made contact with Rui Almeida, the manager of Portuguese Ligue 2 club Troyes, as their search for Steve McClaren's replacement continues. (Football.London)

The 14-year-old son of Brazil legend Ronaldinho has signed a five-year contract with Cruzeiro. Joao Mendes has been with the Brazilian club since last year. (Cruzeiro - in Portuguese) 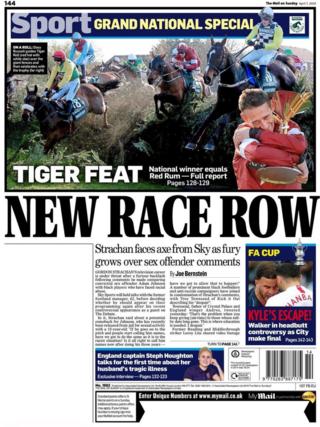