However, it has been reported the Blues have lowered their asking price for Hazard, as they eye Lille's Ivory Coast forward Nicolas Pepe, 23, to replace him. (AS - in Spanish)

Newcastle will offer manager Rafael Benitez a £50m summer transfer budget in a bid to persuade the Spaniard to stay at St James' Park. (Mail)

Alternatively, Benitez has been offered a £100m transfer budget, plus cash from player sales, to rebuild the Magpies. (Mirror)

'A selling club, but in a better financial position'

Do the Dutch giants have the right formula to succeed once more?

Napoli's 27-year-old Senegal centre-back Kalidou Koulibaly has denied he is set to leave the Serie A side for Manchester United. (Express)

Mauricio Pochettino will spend up to £150m revamping his Tottenham squad this summer and could look to sell 28-year-old England defenders Danny Rose and Kieran Trippier. (Mail)

Newcastle managing director Lee Charnley has warned that the club will continue to live within its means after reporting an £18.6m profit after tax. (Sky Sports)

Roma's Bosnian striker Edin Dzeko, 33, is ready to join Inter Milan and is not interested in returning to England. (Calciomercato)

Spanish striker Diego Costa, 30, is refusing to train with Atletico Madrid after he was banned for eight games. (AS - in Spanish)

Liverpool could play a 'home' pre-season friendly in London this summer - with Tottenham's new stadium a possible venue. (Liverpool Echo) 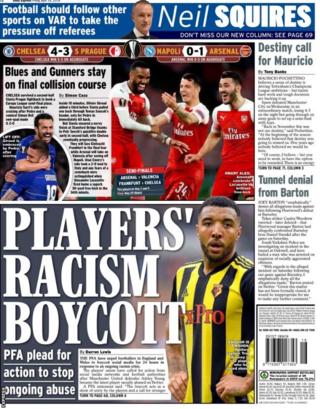