Ivory Coast forward Wilfried Zaha, 26, has said he is ready to leave Crystal Palace and wants to play in the Champions League. (Mail)

Manchester United are prepared to listen to offers for Romelu Lukaku this summer, with the 25-year-old Belgium striker open to a move away from Old Trafford. (Telegraph)

German midfielder Leroy Sane, 23, and Brazilian forward Gabriel Jesus, 22, are just two out of a possible eight players who have asked to leave Manchester City in the summer. (El Chiringuito, via Sun)

Arsenal target Nicolas Tagliafico, 26, has rejected the offer of a new deal at Ajax but his representative, Ricardo Schlieper, has hinted that the Argentine defender favours a move to Italy. (Football London)

The Spanish giants are also closing in on a deal to sign Eintracht Frankfurt's Serbia striker Luka Jovic, 21. (Star)

Burnley manager Sean Dyche will not say how much he thinks Dwight McNeil is worth after the 19-year-old English winger was linked with Arsenal, Manchester City, Liverpool, Everton and Newcastle. (Burnley Express)

Newcastle have told manager Rafael Benitez he will be handed around £50m each year, before player sales, if he agrees to sign a new contract. (Independent)

Barcelona coach Ernesto Valverde has described Pep Guardiola as the best in the business, despite Manchester City's Champions League elimination against Tottenham. (Marca)

Aston Villa's Ross McCormack, 32, will not be returning to Motherwell, the Scottish striker's loan club have confirmed. (Daily Record)

Unai Emery says he is capable of managing the demands for game time among his Arsenal players following speculation over French striker Alexandre Lacazette, 27. (Football London)

Leeds fans are speculating about a potential return of their former player James Milner after the 33-year-old English midfielder, who is out of contract in the summer, was among the absentees as Liverpool revealed their kit for 2019-20. (Express) 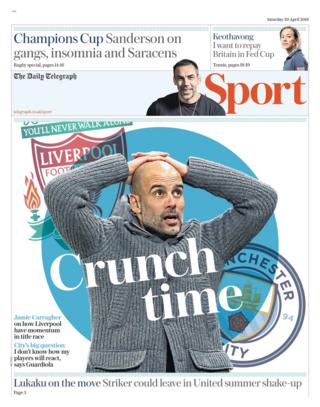 In the Daily Telegraph, "Crunch time"